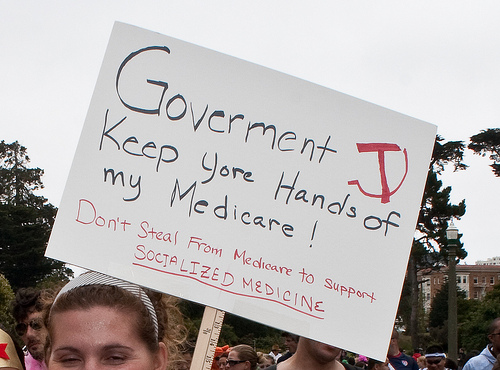 I read the Post’s “In Va.’s 10th District, people of both parties are united in feeling disconnected from Congress”, and basically couldn’t decide if I should burst out laughing, crying, or retching. There’s so much idiocy expressed in here, from the casual racism expressed in the first paragraph, to the rest of the article. About the only smart quotes, frankly, in the entire article were by former Rep. Tom Davis, who understands that this district “grows bluer” everyday, and that “You cannot win this district with the same anti-Obamacare message Republicans are using nationwide, either.” Other than that, though, it’s a hot mess. For instance, take these five “funny” lines – please!

1. “Diane Fisher, who lives on disability payments in Winchester, says she tends to vote Republican because there are ‘too many freeloaders these days. We’re in the lower part of the economy here and people don’t have a lot of money. Everything’s going too fast, too much. We’re getting left behind.'”

The classic “What’s the Matter with Kansas” conundrum: why do people vote against their own self interest? In this case, you have someone who depends on government benefits (disability payments) for her survival, yet rants about “too many freeloaders” and votes for the party of the Ryan budget, which would slash programs for poor people like Fisher in order to reward their wealthy and powerful contributors (corporate and individual). Brilliant! Who ARE those “freeloader,” by the way? For decades, since the “Southern Strategy” honed the messaging to a shrill dog whistle, the Republican Party has relied on convincing working-class white people that those “other” people – blacks, Latinos, etc. – are taking YOUR money and mooching off the system, while you suffer the consequences. It’s all complete bull****, of course, but amazingly there are millions of Diane Fishers out there who actually BUY this crap! Sadly, even in American in the year 2014, fear, bigotry and ignorance remain powerful forces. And, come to think of it, there’s nothing “funny” about that, except perhaps in a very dark humor sort of way.

2. “Fisher blames Obamacare for the current troubles. ‘It’s not fair to make people spend money they don’t have,’ she said. ‘More people have health care now, true dat. But we need somebody who will stand up to Obama; he scares me.'”

There’s so much craziness, misinformation and just wrongness here, it’s almost impossible to know where to start to untangle this mess. Point #1: the Great Recession started in the last year of the Bush Administration, well before “Obamacare” was even close to becoming law. Point #2: “Obamacare” actually does the polar opposite of what Fisher says it does, heavily subsidizing people like her so that they can get affordable, quality health care they didn’t have before (while preventing people from being denied coverage due to pre-existing conditions, letting you keep your kids on your plan through age 26, etc, etc.). Point #3: We were all paying through our teeth for the crazy inefficient system we’ve had, with people being forced to use the emergency room and to wait until they were really sick instead of nipping the problem in the bud early on. Point #4: There’s no rational reason for Fisher – or anyone else – to be scared of our Eisenhower/Ford-style moderate president, but Rush, Sean, Bill, etc. tell them 24/7 they SHOULD be scared of the scary (did I mention scary?) black/Muslim/socialist guy in the White House. And, sadly, people buy into it. Fear, bigotry and ignorance: the three horsemen of the Republican Party? Pretty much.

3. “[Ashley Merrell, a 28-year-old mother of five who has been homeless in Winchester since October] blames Democrats for picking the wrong focus. ‘Why are they spending all this time on health care when people can’t find good work?” she said. “If I have to choose between keeping my lights on or going to the doctor, that’s not even close.'”

What. The. F***? I mean, there’s so much “wrong” here it’s just mindboggling. I’ll let you guys ponder (enjoy?) this one, as it’s not even necessary for me to explain how ridiculous it is.

4. “Merrell plans to vote, but, like many people in the 10th, she’s never heard of any of the candidates. She doesn’t expect any of them will make things better.”

Logic #FAIL 101: She has never heard of the candidates, has no idea what they stand for, yet comes to the conclusion that none of them “will make things better” and “blame[s] both the Democrats and the Republican” equally. Agggggghhhhh – teh stooooopid, it burnz!!!!

5. “Jim Parmelee, chairman of the Northern Virginia Republican PAC…says the solution is relatively simple this year: ‘To get the independents, all you have to do is say, ‘I oppose Obamacare.'”

To the extent that this strategy works, it’s a reflection of all the ignorance, fear, bigotry, etc. reflected in #1-#4. And no, I guess there’s nothing funny about that either. Except, again, in the darkest form of black comedy (perhaps).

UPDATE: I’ve got to add #6 to this list. “Newbraugh admired Wolf for steering clear of the rhetorical warfare that passes for debate these days.” Seriously? Frank Wolf, who is one of the leading Benghazeeeeee! truthers, has steered clear of rhetorical warfare? Now that IS truly funny! LOL