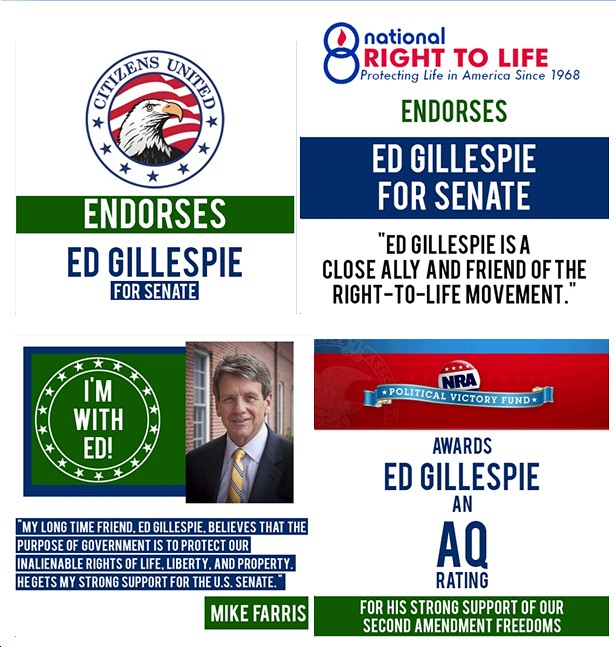 Tomorrow, it is highly like that Virginia Republicans will nominate Ed Gillespie to lose badly to run against Senator Mark Warner. In preparation for his coronation, Gillespie is rolling out endorsements on his Facebook page. They’re quite a bunch, let’s just put it that way. Clockwise in the graphic below, starting at the far right (appropriately enough for Gillespie and his extreme supporters), the right-wingnut endorsers are:

a) The “National Right to Life Committee,” which according to Right Wing Watch is “is the nation’s largest anti-abortion grassroots organization” and also opposes “stem cell research, in vitro fertilization, and cloning,” as well as “some forms of contraceptives, including ‘the pill.'”

b)The “NRA Political Victory Fund,” about whom even Republican Joe Scarborough said, “Their extremism is destroying them” and “How sick are these people that have commandeered the NRA and turned them into an extremist operation for survivalists and gun manufacturers?”

c) Michael Farris, who in 2010 blasted Bob McDonnell for “executive directive” on anti-gay discrimination in state employment, railing that the “deeper message it sends is that people who think homosexuality is a sin are wrong.” Farris also is an all-around extremist who, for instance, is “a leading opponent of U.S. ratification of the United Nations Convention on the Rights of Persons with Disabilities, modeled after the Americans with Disabilities Act.” Among other crazy claims, Farris “stirred opposition by making the questionable claim that U.S. ratification could give the UN control over American children who wore eyeglasses” (the exact quote by Farris was, “my kid wears glasses; now they’re disabled; now the UN gets control over them”).

d) Citizens United – yes, THAT “Citizens United” (the one that’s all about having right-wing billionaires’ money buy and destroy our democracy) – which among other things has produced charming videos like these (“Hillary: The Movie;” “Border War: The Battle Over Illegal Immigration;” “ACLU: At War with America”).

That’s just a sampling of the types of people and groups on the right-wing fringes of the ideological spectrum whose support Ed Gillespie is touting. And while that’s great if you’re trying to win over a convention filled with far-right-wing Republicans, many of the same people who nominated Ken Cuccinelli, E.W. Jackson and Mark Obenshain in 2013, it’s hard to imagine there’s much appeal there to any Democrats, Independents, or sane/moderate Republicans in Virginia.