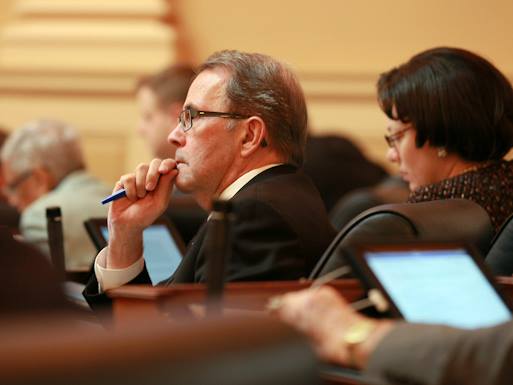 Democratic Del. Bob Brink, who represents the 48th District (mostly North Arlington, with some of Fairfax County as well; I’m told it’s probably 75% Arlington/25% Fairfax in a Democratic primary), was first elected to the Virginia House of Delegates in June 1997 and has been reelected by wide margins since then. See his press release below announcing his resignation (I’ve also heard from multiple sources that he’s headed to the McAuliffe Administration). Thank you to Del. Brink for his service to Arlington and to Virginia! Now, the main thing for 48th district Democrats is to elect a super-strong progressive and pro-environmental champion to go to Richmond and fight for our values. Given that this is an essentially “safe” Democratic seat, there’s no reason to settle for anything less than that. I’ve heard a few names bandied about, including former Democratic candidate Rip Sullivan, Yorktown Civic Association President Andrew Schneider, and environmental/energy expert and Chair of the Arlington Parks and Recreation Commission Paul Holland (also note: Holland’s the son of former/long-time State Senator Ed Holland). So…who do you think would be a good successor to Bob Brink in this seat? UPDATE: I also heard former Dranesville District Chair Ron Bleeker’s name mentioned, and David Boling has announced.

Delegate Bob Brink (D-Arlington/McLean), who has represented the 48th District in the Virginia House of Delegates for the past 17 years, announced Friday that he will retire from the House effective June 30.

“I’ve been honored beyond words to serve my fellow citizens as a member of the House,” Delegate Brink said. “But, ‘To every thing there is a season.’ It’s time for a new person to have this privilege, and it’s time for me to move on to new challenges.”

First elected in 1997, Delegate Brink is 13th in seniority in the 100-member House. He is the Dean of Arlington’s General Assembly delegation.

A member of the House Appropriations Committee and its Health Subcommittee, Delegate Brink cited as some of his proudest achievements in office his work on the FAMIS program which provides health coverage to children of the working poor, as well as efforts to maintain the health care safety net of services to vulnerable Virginians. The ranking Democrat on the House Privileges and Elections Committee, he has advocated for reform of the redistricting process and expansion of access to the vote for all eligible citizens. He also serves on the Education and Transportation Committees as well as on numerous legislative study commissions.

Delegate Brink has received recognition from a variety of groups for his service in the General Assembly. In 2013 the National Federation of the Blind of Virginia presented its Commonwealth Award to him for his efforts on behalf of blind and vision-impaired students. The Virginia League of Conservation Voters has consistently commended him for his legislative record on environmental issues. He headed the Virginia YMCA’s Model General Assembly Program board for a number of years and received the YMCA’s Service to Youth Award in 2001. He is a board member and former chair of the Virginia Foundation for the Humanities and also serves on the board of the Federation of State Humanities Councils.

Delegate Brink concluded, “On a personal note: A few weeks before I was sworn into office in 1998, I was in Richmond for freshman orientation. One night I took a walk around the Capitol and I stopped outside the House chamber. The curtains were open and the lights were on, and for the first time I saw the vote board with my name on it.

“I’ve looked up at that board thousands of times since that night. Some days it seemed like the only vote where I was in the majority was the quorum call. But every day, the knowledge that I’m one of a handful of Virginians whose numbers include Jefferson, Madison, and Patrick Henry made me think that I must be the luckiest guy on earth.”