I applaud President Obama and the EPA’s efforts to regulate the carbon emissions from coal-fired power plants to reduce emissions to 30% of 2005 levels by the year 2030. This is a strong first step in the right direction in the battle to combat global climate change. We need to go even further to move away from our nation’s dependence on fossil fuels and move toward renewable energy like wind, solar, and geothermal. I also encourage divestment from fossil fuel companies.

Levine also applauded Governor McAuliffe’s signing of an Executive Order to create the Virginia Energy Council to explore renewable energy technologies that can be used throughout the Commonwealth and move away from fossil fuels as an energy source.

Levine noted that unfortunately, not everyone in Virginia is ready to follow the President and the rest of the nation to move forward to combat climate change. Some Democratic state legislators, including Patrick Hope, voted with Coal Country Republicans in March to pass HB1261, a bill which would use taxpayer dollars to make Virginia have less stringent environmental legislation than the EPA’s carbon rules required. 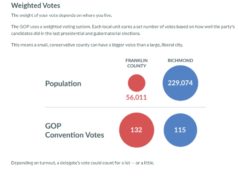 The VA GOP(Q) convention starts at 9 am. Here's where the PredictIt market currently stands - Youngkin the favorite, then Snyder...and further back Cox and Chase https://bluevirginia.us/2021/05/saturday-news-jobs-report-is-latest-sign-of-growing-pains-for-u-s-economy-liz-cheneys-downfall-shows-how-the-gop-threat-to-democracy-is-getting-worse-the-big-lie-is-the-gop#comment-5374973657