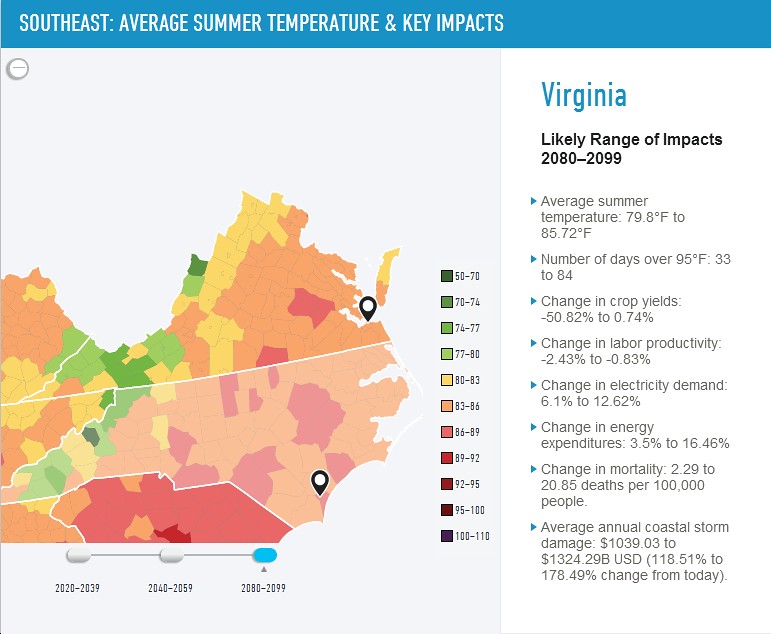 Of course, no scientific evidence or new report will convince all the climate skeptics, deniers, and minimizers out there. Nor will evidence or reports convince those who have a vested financial stake in keeping the fossil fuel gravy train going for themselves, even as it destroys the planet’s environment around them. These people simply don’t care. But for the rest of us, aka the vast majority of the American people, who DO care? For us, reports like this new one by the Rhodium Group, “an economic research firm that specializes in analyzing disruptive global trends,” should have us reaching for our phones to call our representatives and demand action NOW. Need some motivation? Here are a few “highlights” about what’s likely to happen right here in Virginia if we don’t do something serious about this problem now. 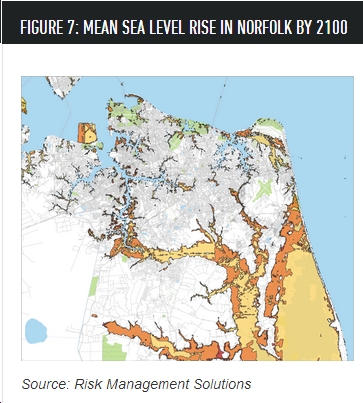 *”On our current path, by mid-century, mean sea level at Norfolk, Virginia-home to the nation’s largest naval base-will likely rise between 1.1 feet and 1.7 feet, and will rise 2.5 feet to 4.4 feet by the end of century. However, there is a 1-in-100 chance that Norfolk could see sea level rise of up to 6.5 feet by the end of the century.”

By the way, I feel like this shouldn’t even have to be stated, but for whatever ridiculous (not to mention dangerous) reason, when it comes to climate change, the science has gotten absurdly politicized (e.g., many Republicans actually reject the science, even though not long ago their party was very strong on the environment, and even though science is not inherently political). So, in that context, let me just emphasize that members of “Risky Business” include Republicans like former Bush Administration Treasury Secretary Hank Paulson; former Secretary of State, Treasury and Labor George P. Shultz (R); and Senator Olympia Snowe (R-ME). With that, I encourage everyone to read the report, and more importantly to make your feelings known about the need for action. The state, county, city, or home you save might very well be your own!