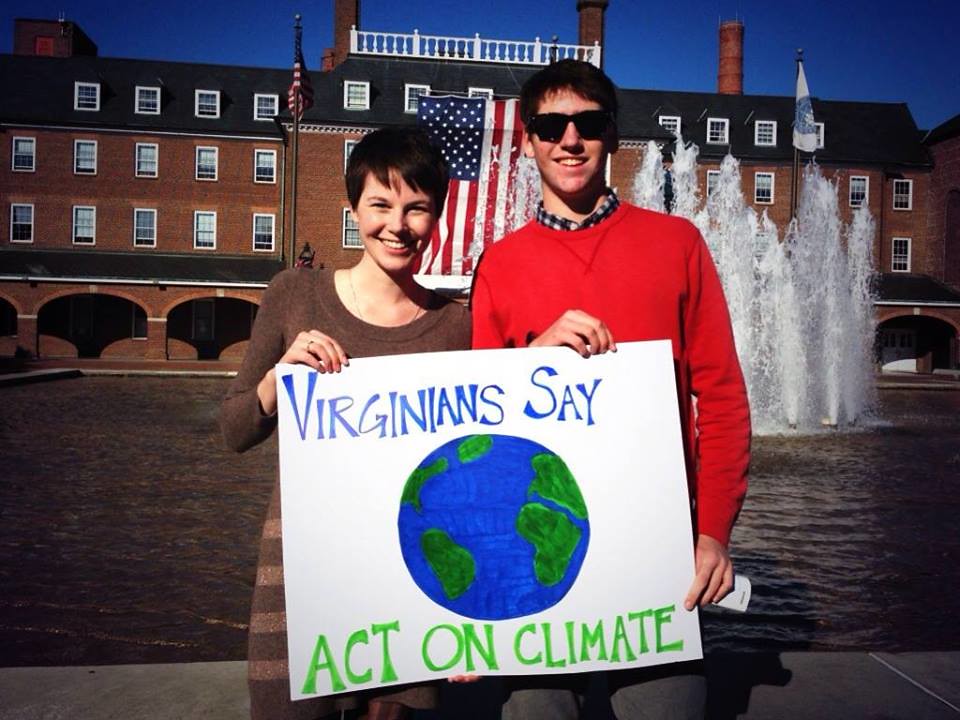 I was reading this AP story (“States move to blunt Obama carbon plan”), and it listed Virginia among states which “have signed laws directing their environmental agencies to develop their own carbon emission plans that consider the costs of compliance at individual power plants.” I was curious what THAT was all about, so I looked up the bill — HB 1261 (“Carbon dioxide; regulating emissions.”).

What surprised me wasn’t that two Virginia right-wing Republicans from “coal country” (Del. Ben Chafin and Sen. Charles Carrico) had sponsored this legislation – that’s expected from fossil fools like these – but that almost everybody else in the Virginia General Assembly, including environmentalists and liberal Democrats, had voted for it.

Here’s how Chafin described the bill on his Facebook page:

In support of our coal industry, I have introduced two bills that have passed the House of Delegates…The second bill adopts new measures to the Virginia Energy Plan to counter the job killing EPA regulations. House Bill 1261 requires studies to be performed of all EPA regulations concerning carbon dioxide emissions in order to measure the negative costs to the coal industry and citizens of the Commonwealth versus any suggested benefits.

Of course, that is complete crap, as the EPA regulations are far more likely to create jobs than to kill them, but apparently Frank Luntz instructed his Republican minions to put the words “job killing” in every sentence with “taxes” or “regulations,” no matter how false and misleading it is to do so. Also, of course, Chafin’s Facebook comments might just be spin, but still…gack.

In other words, Chafin’s position is essentially, “there are profits to be made getting the last lump of coal out of the ground, who cares if we make the earth an uninhabitable hellhold in the process.” Sadly, that’s exactly what we expect from fossil fuel tools like Chafin. But why did only 6 House Democrats (Charniele Herring, Joe Morrissey, Ken Plum, Mark Sickles, Scott Surovell – see his statement on the “flip,” in which he says this bill reads “like something drafted by the Koch Brothers” – and Minority Leader David Toscano) and just two State Senators (Adam Ebbin and Barbara Favola) vote against this malarkey? What happened to everyone else? Was it a failure of the environmental groups to inform House and Senate members to vote no on this bill? Does it reflect the dominance of Dominion Power and other fossil fuel interests in Richmond? Some other explanation?

I asked around and, not surprisingly, got a variety of responses. For instance, one General Assembly Democratic aide pointed a finger at the environmental groups for not sounding the alarm on this bill. In contrast, Ivy Main of the Sierra Club (who blogs here at Blue Virginia periodically), wrote on her blog:

…Under pressure from the governor’s office, the bill was amended to study not just the costs to industry and ratepayers of complying with EPA regulations, but also the benefits. In Senate Ag Thursday, still facing heavy opposition to the bill from the environmental community, Carrico accepted an amendment from Chap Petersen that took out the worst remaining provision, one that would have restricted the state from proposing any standards more stringent than the EPA required. The bill then passed unanimously. Later in the afternoon, HB 1261 was conformed to the amended language of SB 615 and passed handily. The bill remains weighted towards findings favorable to the fossil fuel industry, but it is hugely better than it was.

So, in the end, Ivy Main argues that the bill was watered down to “bad but not horrible.” Virginia Sierra Club director Glen Besa concurred, adding that the AP article makes it sound a lot worse than it is, at least here in Virginia.

A Democratic delegate who voted for the bill basically confirmed this story to me, saying that environmental groups asked him to vote for the bill “after they had it modified to include both costs and benefits.” This delegate told me that the bill didn’t get much attention in caucus, one way or the other, and that on balance the changes were “better than nothing,” but that the bill remains “not great.”

So, a bill that at best is “not great,” yet most Democrats voted for it anyway? I dunno, but I’ve got to say I find it puzzling that anyone who cares about the environment would have voted for a bill whose purpose is to gum up the works here in Virginia against the new EPA carbon rules, to slow things down, and ultimately to try and tilt the process in favor of fossil fuels and against clean energy. And, while it’s easy to play “Monday Morning QB,” I can confidently say that if I had been in the General Assembly, it would have taken me all of about 30 seconds to decide to vote “nay” on this bill. All I needed to see was who sponsored it and what the professed purpose of it was, per its sponsor’s comments.

In doing so, I would have joined Del. Scott Surovell, who was one of the 6 Democrats in the House of Delegates to vote “nay” on this thing. Here’s a statement from Del. Surovell explaining his thinking on this bill. I strongly agree with him (and with the other 5 House Democrats and 2 Senate Democrats who voted “nay”):

The EPA earlier today rolled out regulations that will require electric utilities to slash their carbon emissions by 2030. Most people recognize that this will goal will only be possible if utilities move to generate a greater share of their electricity from non-carbon based renewable sources such as wind and solar.

Virginia has lagged other states because we have refused to adopt a mandatory renewal energy portfolio standard – instead opting for an optional goal-based incentive system which we effectively repealed last year.

While I recognize that we will likely always have some carbon-based electricity generation and protecting coal jobs are critical to Southwest Virginia, I voted against HB1261/SB615, as it asked taxpayers to fund planning and research into maintaining the status quo in Virginia.

Additionally, there was no mention of taxpayers funding strategies to utilize renewable energy to comply with the new federal carbon regulations.  It was a one-sided approach and I thought it read like something drafted by the Koch Brothers.

So, there you have it: somehow, a bill that, even watered down/gutted, remains at heart a malicious attempt to slow down/muck up implementation of the crucial new EPA carbon regulations in Virginia, received almost unanimous support in the Virginia General Assembly. I guess some would argue, laughably, that this represents the “Virginia Way” or some such nonsense. Others would argue that it represents more the power of fossil fuel interests in Richmond. It also could be that environmental groups truly believed that the bill was harmless after being so watered down, and that Democratic legislators felt that there was no need to antagonize the Chamber of Commerce, “Virginia FREE,”> and other corporate interests over what amounted to a whole lotta nothin’. It’s hard to say, but as I noted earlier, it would have taken me about 30 seconds to decide to vote “nay” on this bill…