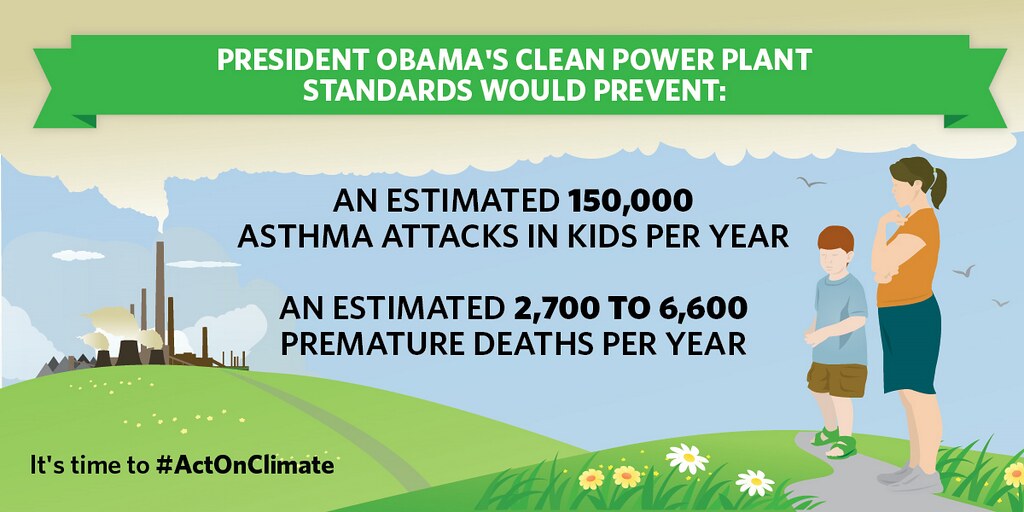 Good news from the White House (see statement below). Although I'd argue that these rules should be MUCH stronger than they are, based purely on the science, this might be the best our f'ed-up political system, thanks mostly to Republicans and their fossil fuel funders, can do at this point. Still, it's a start, and an absolutely essential one towards averting catastrophe. Still a lot more to do, though, such as Congress putting a price on carbon, either via a revenue-neutral tax (e.g., “fee and dividend”) or via a Republican-style, market-based “cap-and-trade” system. So, Congress…hello?!?

With regard to Virginia specifically, I'm very interested how our fine General Assembly, as well as Gov. Terry McAuliffe – who said in 2009 repeatedly that he's a huge fan of clean energy – will comply with these new rules. And then there's the Evil Empire, of course, otherwise known as Dominion Virginia Power. What will they do – lead, cooperate, obstruct, sabotage, other?

WASHINGTON – At the direction of President Obama and after an unprecedented outreach effort, the U.S. Environmental Protection Agency is today releasing the Clean Power Planproposal, which for the first time cuts carbon pollution from existing power plants, the single largest source of carbon pollution in the United States. Today’s proposal will protect public health, move the United States toward a cleaner environment and fight climate change while supplying Americans with reliable and affordable power.

“Climate change, fueled by carbon pollution, supercharges risks to our health, our economy, and our way of life.  EPA is delivering on a vital piece of President Obama's Climate Action Plan by proposing a Clean Power Plan that will cut harmful carbon pollution from our largest source–power plants,” said EPA Administrator Gina McCarthy. “By leveraging cleaner energy sources and cutting energy waste, this plan will clean the air we breathe while helping slow climate change so we can leave a safe and healthy future for our kids. We don't have to choose between a healthy economy and a healthy environment–our action will sharpen America’s competitive edge, spur innovation, and create jobs.”

Power plants account for roughly one-third of all domestic greenhouse gas emissions in the United States. While there are limits in place for the level of arsenic, mercury, sulfur dioxide, nitrogen oxides, and particle pollution that power plants can emit, there are currently no national limits on carbon pollution levels.

With the Clean Power Plan, EPA is proposing guidelines that build on trends already underway in states and the power sector to cut carbon pollution from existing power plants, making them more efficient and less polluting. This proposal follows through on the common-sense steps laid out in President Obama’s Climate Action Plan and the June 2013 Presidential Memorandum.

By 2030, the steady and responsible steps EPA is taking will:

The Clean Power Plan will be implemented through a state-federal partnership under which states identify a path forward using either current or new electricity production and pollution control policies to meet the goals of the proposed program. The proposal provides guidelines for states to develop plans to meet state-specific goals to reduce carbon pollution and gives them the flexibility to design a program that makes the most sense for their unique situation. States can choose the right mix of generation using diverse fuels, energy efficiency and demand-side management to meet the goals and their own needs. It allows them to work alone to develop individual plans or to work together with other states to develop multi-state plans.

Also included in today’s proposal is a flexible timeline for states to follow for submitting plans to the agency—with plans due in June 2016, with the option to use a two-step process for submitting final plans if more time is needed. States that have already invested in energy efficiency programs will be able to build on these programs during the compliance period to help make progress toward meeting their goal.

Since last summer, EPA has directly engaged with state, tribal, and local governments, industry and labor leaders, non-profits, and others. The data, information and feedback provided during this effort helped guide the development of the proposal and further confirmed that states have been leading the way for years in saving families and businesses money through improving efficiency, while cleaning up pollution from power plants. To date, 47 states have utilities that run demand-side energy efficiency programs, 38 have renewable portfolio standards or goals, and 10 have market-based greenhouse gas emissions programs. Together, the agency believes that these programs represent a proven, common-sense approach to cutting carbon pollution—one in which electricity is generated and used as efficiently as possible and which promotes a greater reliance on lower-carbon power sources.

Today’s announcement marks the beginning of the second phase of the agency’s outreach efforts. EPA will accept comment on the proposal for 120 days after publication in the Federal Register and will hold four public hearings on the proposed Clean Power Plan during the week of July 28 in the following cities: Denver, Atlanta, Washington, DC and Pittsburgh.  Based on this input, EPA will finalize standards next June following the schedule laid out in the June 2013 Presidential Memorandum.

In 2009, EPA determined that greenhouse gas pollution threatens Americans' health and welfare by leading to long lasting changes in our climate that can have a range of negative effects on human health and the environment. Taking steady, responsible steps to cut carbon pollution from existing power plants will protect children’s health and will move our nation toward a cleaner, more stable environment for future generations, while supplying the reliable, affordable power needed for economic growth.

Fact sheets and details about the proposed rule available at: