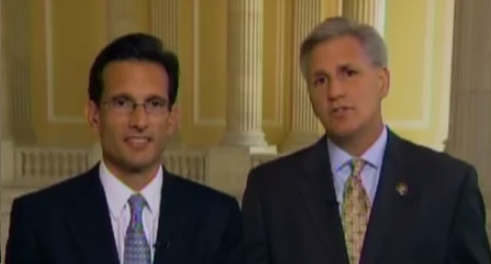 Is the right wing of the Republican Party unhappy about the election of Kevin McCarthy as the new Republican Majority Leader in the House of Representatives? Perhaps not, if The Bull Elephant post, “Breaking: The Stupid Party Doubles Down”, is any indication. (note: the Bull Elephant is the leading conservative blog in Virginia, according to none other than Ken Cuccinelli)

McCarthy, as conservatives know by now, is a Cantor clone. The party elite could not have been more tone-deaf in this selection, but of course all they listen to are the lobbyists who facilitate the flow of campaign donations. The GOP has long been known as “the Stupid Party” (as opposed to the Democrats who are “the Evil Party”), and if ever there was confirmation of that moniker, we got it today.

That sound you hear? That’s the sound of your party leadership flipping you the bird.

I don’t know how McCarthy is going to be able to function as Majority Leader when he is vehemently opposed by a majority of his own party’s voters. But one thing I am quite sure of is that the GOP Civil War just went national, and things are about to get real.

The party could not have picked a more offensive, outrageous candidate for Majority Leader.

All I have to say is…pass the popcorn, please! 🙂