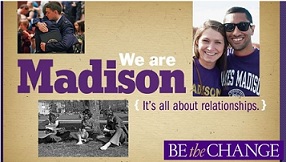 Tonight was WHSV’s third installment in a series indicting the James Madison University Administration for failing to take sexual assault seriously. Apparently the McAuliffe Administration fails to recognize the malfeasance that is evident or suffers the same hope that this will simply be forgotten. Suspend and investigate the administrators now!

…with this verdict, myself, along with all the other females in the student body are torn down enormously. As a senior about to graduate in a few short weeks, I feel as though my last year has been tainted. I do not want to share a diploma with these three boys. I do not want to tell people I graduated from a school that thinks sexual assault and sexual harassment are acceptable. – excerpt from a letter to President Alger from a party to the school’s investigation

Below the fold is the full letter to JMU President Alger from a friend of the victim that expresses frustration that the sexual assault of a student was taken so casually and dealt with so lightly. Like JMU advertises, “It’s all about relationships.”

My name is Allison Miller and I am writing to inform you how very disappointed I am to hear the ruling that the Judicial Office came to in a recent hearing about sexual assault and sexual harassment. I felt compelled to write to you because I am experiencing great frustration, as sexual assault and sexual harassment are two accusations that are not to be taken lightly. The hearing I am speaking of involved the accusing student Sarah Butters, who was charging Jay Dertzbaugh, Nick Scallion, and Mike Lunney with the aforementioned charges. As you may not know I am a close friend of Sarah’s and was even a character witness in one of the three hearings she partook in. Sarah does not have any knowledge that I am writing to you. Sarah was sexually assaulted by the three boys mentioned last spring break (2013) in Panama City Beach, Florida. She was taken advantage of while under the influence of alcohol. The boys then video-taped the assault and sent it around throughout greek life and the JMU student body. Sarah was not aware of the video for a great deal after spring break. Upon finding out about the video, she met with judicial to learn what could be done. She was told as long as all of the parties involved were still currently students she could press charges through judicial. Sarah was encouraged to see all of her options and even seeked counseling through services here at JMU. She decided she wanted to go forward with the judicial proceedings over Christmas break of this year when the boy’s suspension from their fraternity (Sigma Chi) was not enforced, when she realized she did not feel safe around them and did not receive the closure she felt necessary.

The countless hours I have spent with Sarah throughout this ordeal and the proceedings of the three judicial hearings has been enormously tough to put it simply. After the first hearing with judicial, all three boys were found responsible of sexual assault and harassment. The punishment given was expulsion after graduation. Sarah was told she could appeal if she was not satisfied with the ruling so she did. The second hearing found the three boys responsible again and this time ruled that all three would be expelled immediately. The three boys then appealed this ruling. The last judicial hearing ruled they were all responsible again, yet the sanctioning was sadly the same as the first hearing, expulsion after graduation. I am writing to you because this is not a sanctioning that fits the gravity of what these boys have done.

I grew up living an average, somewhat sheltered life, with my family in the suburbs of New Jersey. Growing up, having a father who was an attorney, I had never felt justice was out of my reach. I have held the strong believe that those in the wrong received punishment and those wronged received justice. Today, I felt a grave injustice. There was no justice served with the sanction that was awarded those three boys. I say awarded because they were given a gift. Who will sit with Sarah while she cries and questions what the point was of enduring all the pain that this process brought on? Who will make Sarah, myself and the rest of the female student body of JMU feel safe at this university?

I am an active member of my sorority; I was on the executive board the 2013 year, held a job on campus 2012-2013 at Madison Connection and I partake in many on campus activities. As a former Madison Connection caller, I was in contact with an extensive amount of alumni daily and established great rapport with many. I am sure the alumnae I spoke with would be appalled to hear what was going on at this university currently. I speak for not only myself but numerous other members of the student body when I say I do not and will not feel safe with these boys at James Madison University. They have been not only found guilty of sexual assault and harassment three times but were once even told their punishment was expulsion immediately. These are not good people, and I would hope this is not the “Madison Way”. As someone who truly, loves this school immensely with my entire heart, James Madison has wronged me, every other woman, and every other student on this campus today. My heart is broken by what my school is telling me and the message that is sent to young women. I have always been encouraged to be an independent, strong, female; my strengths have been fostered here at this institution these past four years but with this verdict, myself, along with all the other females in the student body are torn down enormously. As a senior about to graduate in a few short weeks, I feel as though my last year has been tainted. I do not want to share a diploma with these three boys. I do not want to tell people I graduated from a school that thinks sexual assault and sexual harassment are acceptable. I have heard of universities sweeping matters “under the rug”, but not once did I think it would be my university. I held JMU to a higher standard, I was under the impression JMU wanted to create students who would go on to become enlightened citizens. How can we be these enlightened citizens you speak of if we are crushed when we stand up for ourselves?

Throughout this entire judicial process I can tell you what I have learned. Today I have learned, if you are sexually assaulted and a woman, it is better to not stand up for yourself. I learned if you are sexually assaulted, even if there is a video of the incident, there still will not be enough proof. I learned if you are sexually assaulted by three males who come from a privileged background, then it is too bad for you, they get the punishment easiest for them. My heart aches for my school and for my friend. James Madison University I have been truly knocked down and stomped on. How will you explain this outcome to a female close to you? I am sure you are aware of the statistics, individuals who have been sexually assaulted have higher rates of depression, suicide, drug and alcohol abuse, and the list goes on. Recently, with Obama’s task force to help prevent sexual assaults on campuses across America I would hope James Madison University steps up and realizes they have made an enormous mistake. The system needs to be stripped and changed before anyone can feel safe on this campus.

While we wait for some word from the Governor, the Education Department is leaning forward. Three universities in Virginia are currently under investigation.