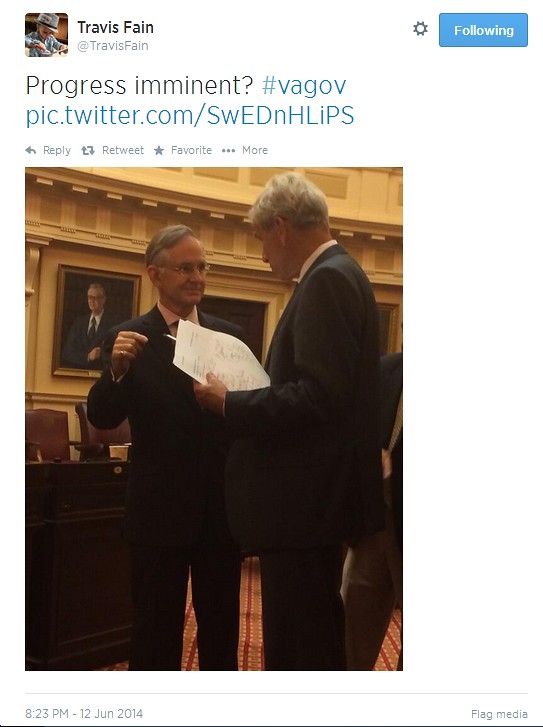 UPDATE 10:53 pm: Sen. Watkins is right about Medicaid expansion, but he’s making a huge mistake by voting for the Medicaid-expansion-killing amendments, “reluctantly” or not. Very sad. Also, the Puckett resignation just killed Medicaid expansion in Virginia for the next two years. Nice job, traitor.

UPDATE 10:28 pm @TravisFain tweets, “Sen McEachin just told the senate he was diagnosed with rectal cancer in Oct. #vagov insurance saved him.” Wow, Sen. McEachin is speaking really powerfully right now about why 400,000 Virginians need health insurance, how it’s immoral to deny this to them. Anyone with a heart has to be swayed by this…right? Do any Republican Senators have a heart (or a brain)?

UPDATE 10:18 pm: Sen. Barker giving an impassioned speech for why we need to expand Medicaid. The sad, anger-inducing thing is that Republicans apparently don’t give a crap about hurting Virginia’s economy, hundreds of thousands of Virginians, etc. We need to vote these people out of office ASAP!

UPDATE 10:11 pm: Good news via @LVozzella – “Black amendment, intended to block Medicaid commission from expanding program without GA approval, fails 17-22.” And now comes the bad news, as Republicans do everything they can to prevent Medicaid expansion for 400,000 Virginians? Sure seems like it.

UPDATE 10:04: Travis Fain tweets, “to be clear: the Medicaid language Sen. Black is against being “slipped” into the budget was in the McDonnell budget. In January.” Of course, we’re talking about the extremist lunatic Dick Black, so what else would we expect but bloviating bull****?

UPDATE 9:34 pm: Del. Keam has one of the best tweets I’ve seen in a long time – “After hours of tense closed door meetings, it’s clear Virginia Senate is run by a couple of Dicks… Dick Saslaw and Dick Black, that is.” Hahahaha.

UPDATE 9:05 pm: Daily Press reporter TravisFain tweets, “Garrett: idea behind amends is to set out legislative intent ‘in black and white’ for when gov expands and it goes to court.” Fain adds, “Approps chair jones confirms: this amend passes senate, it’s good in the house.”

UPDATE 8:40 pm: Del. Mark Keam tweets, “So, after sitting around for the last 2 hours, the VA House will go into recess until 9:10 pm. And Senate still hasn’t acted on anything…”

Why does this photo not give me a “warm and fuzzy” feeling? Maybe because of reports like this?

Bowing to diminished Democratic power and a looming government shutdown, the Senate Finance Committee voted Thursday for a budget that eliminates Medicaid expansion and almost all new spending.

The nearly unanimous vote was another step toward ending the protracted budget-and-Medicaid standoff that has consumed the state Capitol for most of the year. But it was no guarantee that the fighting was over or that a shutdown would be averted.

The plan still needs approval from the full Senate and House, and then from Gov. Terry McAuliffe (D), for there to be a budget in place in time for the start of the new fiscal year July 1.

The Senate was in limbo Thursday night, hours after the chamber had been scheduled to vote on the budget and send it to the House.

Also, I’ve been saying for months now that I didn’t see a successful “end game” for Democrats in all this, as I didn’t believe Republicans would budge (also didn’t see the public rallying behind Medicaid expansion). And that was BEFORE “Benedict Puckett” upped and quit the Senate, throwing away Democrats’ hard-earned control of that body. So now what? Probably a lot of nasty budget cuts like these, combined with no Medicaid expansion, combined with both houses of the General Assembly under Republican control. Other than that, how was the play Mrs. Lincoln? 🙁