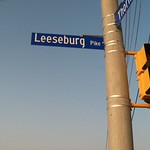 How do you know for sure when your country and state are descending into idiocracy?  When your government starts misspelling the street signs.

Leesburg Pike is one of the longest and most prominent streets in Fairfax County.  It represents a major stretch of Route 7, which has its own insanely detailed Wikipedia page. And it’s named for the largest incorporated town in Virginia – you guessed it, Leesburg.

So, it’s not a name that you’d expect our government to muck up.  But the photographic evidence above suggests otherwise, on a portion of Route 7 in the Falls Church area near Seven Corners. Now apparently renamed “Leeseburg Pike.” A block away from where Fairfax County is locating a new public school.

Education — it’s worth investing in!