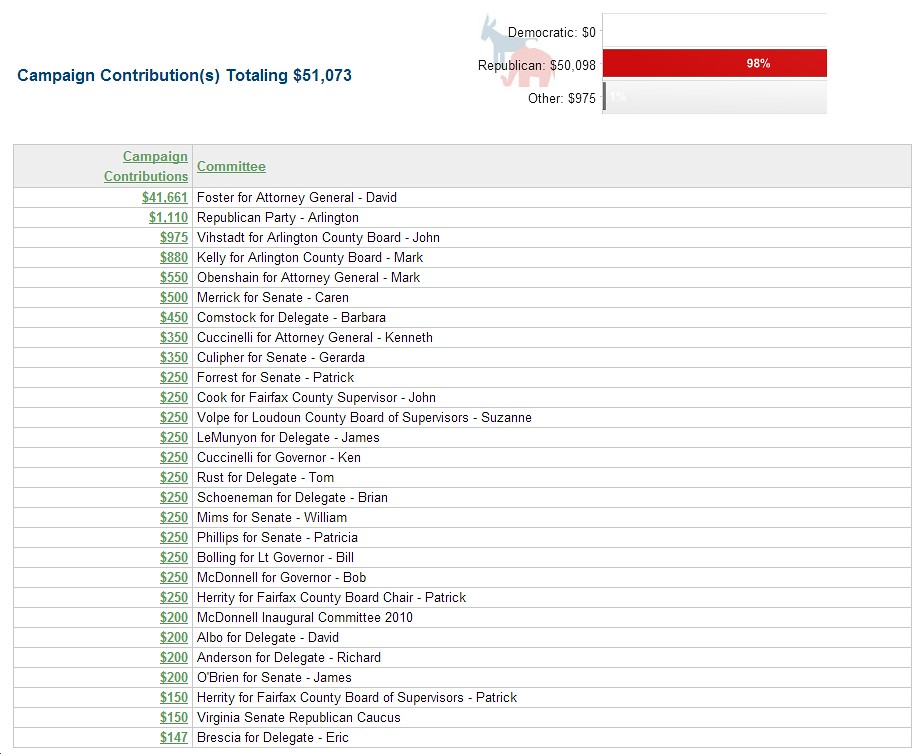 Yesterday in ArlNow, State Senator Barbara Favola did a great job explaining why 48th House of Delegates district Republican nominee Dave Foster, despite “running with the best of intentions,” is just dead wrong on basically every issue voters in the district care about. For instance:

*”Dave Foster…said in his 2009 attorney general’s race for the Republican nomination that the gun show loophole is not a loophole.”

*”Dave has said he wants to eliminate the ban on carrying firearms in national parks.”

*”Dave has said he opposes abortion and that Roe v. Wade was a case of ‘judges imposing their will.'”

*”Dave Foster resisted SOL reform that would have made common sense adjustments to state testing requirements.”

*”Dave has called Ken Cuccinelli a ‘great legislator,’ and supported Cuccinelli for attorney general in 2009 and governor in 2013. He has endorsed and financially supported Virginia Tea Party leaders and is former chair of GOPAC-Virginia, a fundraising arm of the Republican National Committee.”

Not enough evidence for you that he’s not a moderate in any way, shape or form? How about the fact that he bragged about ragged opposing bilingual education and “racial preferences,” or that he told a pro-gun group more extreme than the NRA that their concerns were his concerns, or that he’s all about “rooting out voter fraud wherever it may occur” (note: “voter fraud” is a myth, no evidence whatsoever for it being a problem, and is simply a smokescreen for Republicans to suppress the votes of minorities, young people, etc.; that Foster buys into the loony-tunes garbage is VERY telling!)?

Still not enough evidence? Well, then, how about his donation record here in Virginia (see above; click to “embiggen”)? Turns out, the guy’s given a whopping $50,000 over the years to Virginia Republicans, including some of the most extreme. For instance, Foster donated $550 to Mark Obenshain, an extremist by any standard, who among other insane things introduced a bill that would have criminalized miscarriages (and actually forced women to report them to the police)! Even worse, Foster gave Obenshain that money in late October 2013, after all the information about Obenshain’s extremism had already come out, just weeks before a crucial election that almost elected Obenshain Attorney General over Mark Herring, and about the same time as Foster’s and Obenshain’s party had just shut down the U.S. government. Yikes.

STILL not enough evidence that (to paraphrase what Mark Herring), Foster gives money to candidates who vote like E.W. Jackson talks? Well, then, how about his long support for climate-science-denying (and climate-scientist-persecuting), women’s-rights-denying, coal industry tool, gun nut, conspiracy theorist (including “birtherism”), and overall right-wing extremist Ken Cuccinelli? Note that Foster’s last donation to Cuccinelli came in mid-September 2013, long after Cooch’s nuttiness and extreme stances on issue after issue were known to the public. Which means that either Foster agrees with Cooch – and Mark “Criminalize Miscarriages” Obenshain – on the issues, or he doesn’t care one way or the other but will simply support anyone with an “R” after their name. My bet is the former, actually: Foster acts “moderate,” doesn’t come across as nuts, but in fact shares the same views as the most extreme members of his party – Cooch, Obenshain, Barbara Comstock, and this character. So, yeah, Foster may be a friendly, likable guy, but as State Senator Barbara Favola so correctly put it in her ArlNow piece, his “views are wrong for Virginia and wrong for the 48th District.” Unless, of course, you believe in climate science denial, criminalizing miscarriages, shutting down the government, launching crusades against health care coverage for hundreds of thousands of Virginians, etc, etc. If that’s the case, the Dave Foster’s your candidate. If not, then make sure you vote for Democratic nominee Rip Sullivan on August 19. Thanks.

P.S. Also worth noting is that Ken Cuccinelli won just 22% of the vote in Arlington County in 2013, while Mark Obenshain won a whopping 25%. Those are the folks Dave Foster supports, in contrast to 75%-78% of Arlington voters (and the vast majority in the Fairfax portion of the 48th district as well).

Senators Chap Petersen, Jeremy McPike Explain Why They Are Probably Moving From Voting “Green” to “Red” on the Commanders Stadium Deal