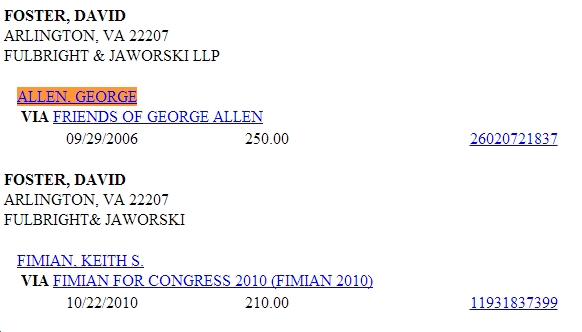 Since 48th House of Delegates district Republicans chose Dave Foster as their candidate for the August 19th special election to fill the seat of Del. Bob Brink (D), we’ve been looking into this guy who claims to be a moderate Republican. From what we’ve found to date – his stated positions on the issues, his pandering to an extremist gun group, etc. – he’s most certainly not. Here’s a quick review of what we’ve posted so far on this faux-“moderate.”

*More video: Foster pushes for “rooting out voter fraud wherever it may occur”

*Sen. Barbara Favola nails Dave Foster in ArlNow piece (e.g., ‘”Dave has called Ken Cuccinelli a ‘great legislator,'” and “Dave has said he opposes abortion and that Roe v. Wade was a case of ‘judges imposing their will.'”)

As if all that’s not bad enough, how about Foster’s $250 donation to our old pal George Allen, on September 29, 2006? In particular, note the date – that’s 1 1/2 months AFTER Allen’s infamous “macaca” incident, and well after every sentient voter in Virginia should have heard about it. It’s also well after many other revelations about George Allen’s racist, violent past had come out, including:

*Allen “shoving a severed deer head into [an African-American man’s] mailbox during an early-’70s hunting trip.”

*Allegations by several people who knew Allen that he “habitually used the n-word to describe blacks while he was a student at U.Va. decades ago.”

*George Allen’s photo-op with the Council of Conservative Citizens, the successor organization to the segregationist White Citizens Council and among the largest white supremacist groups.

*Allen’s sister writing about how George had dragged her upstairs by the hair, and in another incident held her, terrified, over Niagara Falls.

*Allen welcoming one of his sisters’ boyfriends to the house by “slamming a pool cue against his head.”

*Allen’s love of the Confederate flag, even though the only “South” he grew up in was Southern California. Heh.

*Allen freaking out when asked in a debate about his family’s Jewish heritage, angrily accusing Peggy Fox of “making aspersions about people because of their religious beliefs.”

We could go on and on, but we’ll spare you. The main point is, beyond Allen’s deplorable voting record in the U.S. Senate (97% with George W. Bush), all of the stuff listed above should have been more than enough to convince any but the most hard-core right wingnuts to ditch George Allen and support Jim Webb. Yet, not only did Dave Foster NOT ditch George Allen, he actually donated money to him after all this stuff had come out! At that point, all pretense of Foster being a “moderate” Republican should have been out the window, down the toilet bowl, whatever cliche you prefer. Yet this guy has the chutzpah to continue going around masquerading as one. Does he think voters are utterly clueless or what? Does he not know of such things as “Google” and “VPAP” and “YouTube” the “Internet Archive,” and also many peoples’ memories of his comments and actions over the years? Apparently, he’s hoping that we’ll forget about all that. Well, sorry to break it to you Mr. Foster, but that’s not going to happen. Nice try, though. 😉

P.S. Make sure you vote for DemocratRip Sullivan on August 19th — a special election in the middle of the “dog days of summer,” which means flaky things can happen regarding turnout, even in an overwhelmingly Democratic district. Thanks.