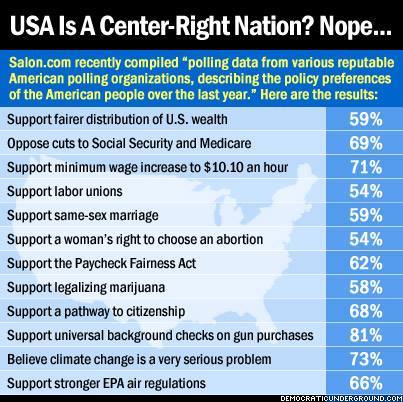 I feel like a broken record on this, but I keep hearing offhand comments about how this is really a “center-right country,” or how most Americans are not progressives, or how today’s Democratic Party (centrist or even center-right by historical standards, let alone by the standards of other developed countries) is “super liberal,” “socialist,” blah blah blah.

In reality, of course, America today has a centrist party (the Democrats), a hard-right party (the Republicans), and an right-wing extremist rump “party” (the “Tea Party”). In stark contrast, European countries generally have a wide political spectrum from far left (Communist) to left (Socialist) to center-left (Social Democrats) to center-right (Christian Democrats) to right-wing extremist (the National Front, UKIP). Of course, even the center-right parties in Europe generally favor clean energy, unions, universal health care, strict gun control, etc. – totally different than here in the U.S. With that, let’s take a look at the most recent polling, courtesy of PollingReport.com, to demonstrate beyond a shadow of a doubt that the American people support a long line of progressive policies, and pretty much no conservative policies to speak of.

It’s also worth noting that those of us who write at this blog – including “Teddy Roosevelt Progressives” like me, who grew up basically a progressive Republican in the Jacob Javits/Lowell Weicker/John Chaffee mode – are in the (strong) majority on basically everything. No, it doesn’t fit the stereotype of right wingers out there, or the corporate media which loves its “both sides” false equivalencies. But it nonetheless remains a factual statement.

*Global Warming: By a 58%-30% margin, Americans believe that “the federal government should limit the release of greenhouse gases from existing power plants.”

*Contraception: Americans overwhelmingly support contraception access, including a 53%-41% margin saying that “employers who object to birth control and other contraceptives on religious grounds…should not be exempt from the requirement that their health plans cover prescription birth control.”

*Immigration: Only 22% of Americans favor deportation of “immigrants who are currently living in the U.S. illegally.” In contrast, 58% of Americans support “allow[ing] them a way to become citizens provided they meet certain requirements.” By a 65%-31% margin, Americans support the bipartisan, comprehensive immigration bill passed by the Senate and being held up by the Republican-controlled House of Representatives that “llowed foreigners staying illegally in the United States the opportunity to eventually become legal American citizens if they pay a fine, any back taxes, pass a security background check, and take other required steps.”

*Labor Unions: By a 54%-39% margin, Americans approve of labor unions.

*Campaign Financing: By huge margins, Americans support ” limiting the amount of money individuals can contribute to political campaigns” (71%-25%), and limiting spending by “groups not affiliated with a candidate” (76%-22%).

Also see GOP’s 30-year spin job is over: Why we are not a center-right nation for a few more interesting poll results.

*”69 percent of Americans oppose any cuts to Social Security or Medicare, even in order to cut the deficit, while only 23 percent support such cuts.

*”Between 60 percent and 80 percent of Americans support increasing taxes on the wealthy.”

Bottom line: on issue after issue after issue, progressives aren’t just in the majority, but the LARGE majority in most cases. Conservatives, on issue after issue after issue, are not just in the minority, but in the small minority in most cases. Which raises the question yet again, how do conservatives ever win elections? For that, see books like “What’s the Matter with Kansas?” and movies like Boogie Man: The Lee Atwater Story. In short, it’s about the Republicans relentlessly (and skillfully, and with huge amounts of money) preying on resentment, fear, anger, ignorance, and intolerance. Also note that the corporate media has, for years, completely failed to do its job of reporting the truth. Instead, they have been bullied by loud and belligerent right wingers into “reporting” false equivalency nonsense on issue after issue (e.g., there are NOT “two sides” to climate science). Other than that, it seems to me, we would have had all the policies listed above, supported by strong majorities of the American people, a long time ago.