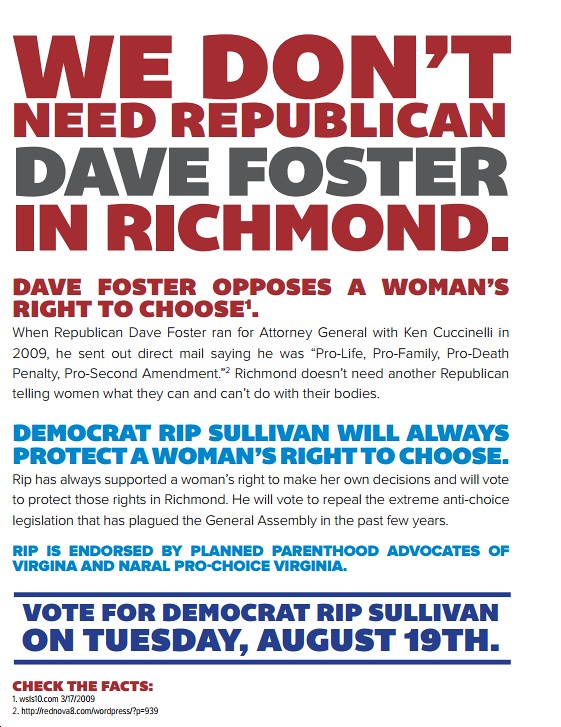 Meanwhile, according to the invaluable Virginia Public Access Project (VPAP), 48th House of Delegates district Republican candidate Dave Foster reported $98,792 in total receipts from July 1 through August 8. More interesting is where that money came from, starting with $10,000 from none other than Virginia House Speaker and right-wing Republican Bill “ALEC” Howell. So much for Foster’s claims that he would be an independent voice of some sort in the Virginia House of Delegates, or be able to seriously challenge Speaker Howell and the rest of the House Republican leadership’s obstinate refusal to expand Medicaid under the “Marketplace Virginia” concept or otherwise. In reality, he’d be totally under Speaker Howell’s thumb, just another reliable vote for Howell’s right-wing agenda. No thanks.

As a side note, another “interesting” donation to Foster was $117 (why $117? got me!) from none other than our old pal George Felix Allen. My understanding is that Foster and Allen are long-time political allies, with Foster even acting as a debate “surrogate” for Allen against Tim Kaine surrogate Larry Roberts in the 2012 U.S. Senate race. In other words, if Foster had his way, not only would we have Gov. Cuccinelli and Attorney General Obenshain instead of Gov. McAuliffe and Attorney General Herring, we’d also have U.S. Senator Allen instead of U.S. Senator Kaine. What a nightmare, but thank goodness, every one of these right-wingnut candidates Foster supported LOST. Now, we just have to make sure Foster himself loses on August 19. So…if you live in the 48th District, make sure you vote for Rip Sullivan. Thanks!