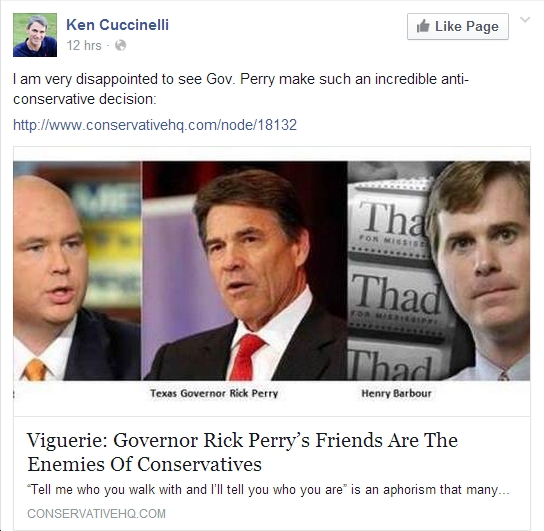 Here are a few national and Virginia news headlines, political and otherwise, for Friday, August 29. Also, gotta love Ken Cuccinelli, demonstrating yet again how extreme the Tea Party is, when even far-right-wing Rick Perry is considered “anti-conservative!”

*A climate for change: The U.S. can help drive a new round of global carbon cuts (I’m glad the Post did this series of editorials on global warming the past few days, but more importantly they need to stop: a) giving a platform to science deniers; and b) doing “false equivalency” journalism. If not, then the benefit of these editorials is negated.)

*Hillary Clinton on Ferguson: ‘We Are Better Than That’

*Islamic State waterboarded Foley, others (It’s evil if they do it, and it’s evil if we do it. Why has no U.S. official – Cheney, etc. – been prosecuted for authorizing torture?!?)

*Obama on the Islamic State: ‘We don’t have a strategy yet’ (Right wingers are going nuts about this comment, but the fact is there aren’t a lot of great options here.)

*Another big boost for Obamacare (“In another sign that the politics of Obamacare continue to shift, the Medicaid expansion is now all but certain to come to another big state whose Republican governor had previously resisted it: Pennsylvania.” Hello Bill Howell?)

*The Koch Brothers And Republican Party Have Just Joined Forces To Track Voters (I presume the Tea Party will go nuts about this, right? Oh wait…)

*Medicaid plan from House GOP (“Virginians have waited all year for House Republicans to offer a plan. Rust and Davis have stepped up and done so. Party leaders would be wise to give it a full hearing, and to recognize it for what it is: a way for them to do what’s right for Virginia.”)

*Closing arguments set to begin as McDonnells’ trial nears its endgame (“The judge’s instructions to jurors, including the definition of an ‘official’ act, could shape deliberations.”)

*What’s America’s No. 1 Problem? A surprising answer from Rep. Scott Rigell (No, just hypocrisy given that he refuses to point the finger at the source of the problem: the Tea Party and Teapublicans blocking everything and pushing for harmful policies.)

*Voters may have crossed Va.-Md. line to cast ballots twice (“‘The GOP has been on a witch hunt for voter fraud for 15 years to make it harder for people to exercise their constitutional rights,’ said Del. Scott A. Surovell”)

*Our view: Election skullduggery (“Critics, at least in this quarter, do not say voter fraud is myth, but that it has taken on mythic proportions unwarranted by the evidence – especially in regard to voter impersonation.”)

*A refreshing Friday as summer recharges for the holiday weekend