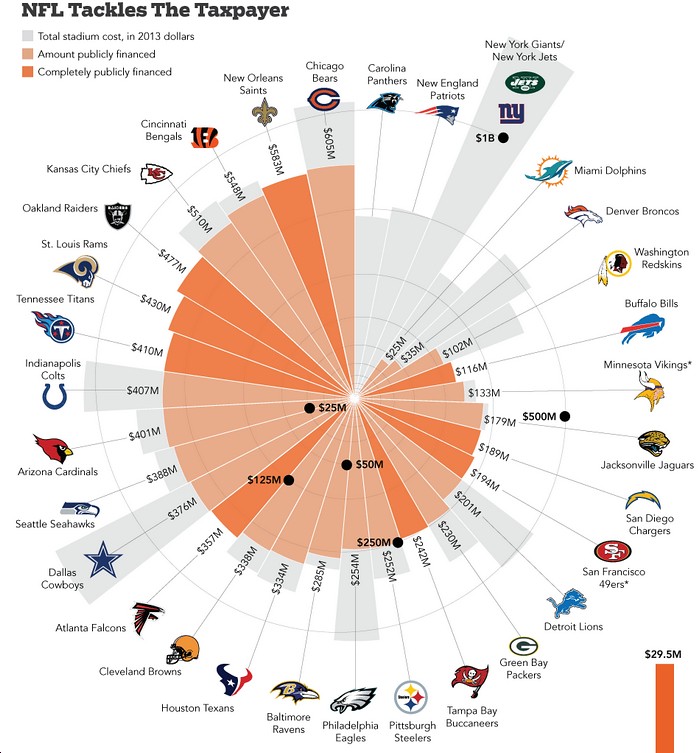 It’s now crystal clear that billionaire R**skins owner Dan Snyder has kicked off the bidding war von which jurisdiction (Maryland? DC? Virginia?) will offer the most taxpayer-funded corporate welfare to build his super-rich franchise a new stadium. It’s also becoming more apparent why Gov. McAuliffe has been so reluctant to weigh in on the racist (or not, if you buy the R**skins’ so-called “arguments” that it really isn’t racist) team name issue. Anyway, as the process begins to figure out which suckers will cough up the most hard-earned, and much-needed-for-other-uses tax money so that mega-rich Republican Dan Snyder can get even mega-RICHER than he already is, here’s some reading material for Gov. McAuliffe to check out — BEFORE Dannyboy comes a callin’.

1. First, some history from the last time (1992) a rich R**skins owner (Jack Kent Cooke in that case) came looking for taxpayer handouts from a Virginia governor (L. Douglas Wilder in that case). In particular, note: “Both Wilder and Cooke have said in recent days that they were surprised by the vehemence of the opposition to Potomac Yard and that they had assumed most Virginians would be excited about the prospect of the Redskins playing in the state. It was a pivotal miscalculation, especially during a time when the state government had gone through two years of budget cuts. Cooke would have built the $160 million stadium himself, but many thought the $130 million state subsidy for site improvements was unjustified.” Is history about to repeat itself? Stay tuned!

2. Now, some economics. How the NFL Fleeces Taxpayers (“Taxpayers fund the stadiums, antitrust law doesn’t apply to broadcast deals, the league enjoys nonprofit status, and Commissioner Roger Goodell makes $30 million a year. It’s time to stop the public giveaways to America’s richest sports league-and to the feudal lords who own its teams.”)

3. More economics. Football: A Waste of Taxpayers’ Money: Why are we subsidizing such a hugely profitable sport?  (“…forget about GM and Chrysler, Solyndra, or even cowboy poetry readings. Fact is, nothing is more profitable, more popular, and more on the public teat than good old American football. That’s right. You, dear taxpayer, are footing the bill for football through an outrageous series of giveaways to billionaire team owners and public universities that put pigskin before sheepskin.”

4. Here’s How The NFL Makes A Killing Off Of Taxpayers (see infographic above)

5. If You Build It, They Might Not Come: The Risky Economics of Sports Stadiums (“Time after time, politicians wary of letting a local franchise relocate — as the NBA’s Seattle Supersonics did, to Oklahoma City before the 2008-2009 season — approve public funds, selling the stadiums as public works projects that will boost the local economy and provide a windfall of growth. However, according to leading sports economists, stadiums and arenas rarely bring about the promised prosperity, and instead leave cities and states mired in debt that they can’t pay back before the franchise comes calling for more.”)

6. Finally, just to demonstrate that it’s not only progressives who oppose taxpayer-funded corporate welfare to wealthy sports owners, it’s also the freakin’ Koch brothers! (“So we have to ask – is giving handouts to professional sports teams a responsible use of tax dollars or is this money better spent somewhere else?  The answer seems clear. Our elected officials need to stand up for the taxpayers and stop giving out taxpayer-funded corporate welfare to professional sports teams.“). Of course, the Koch brothers are wild hypocrites, as they LOVE corporate welfare for themselves, but the point is that this is NOT a left-right issue. To the contrary, this is an issue that everyone who pays taxes or lives in the state should agree on: it’s a terrible idea to use our scarce tax dollars (which should be used for education, transportation, cleaning up the Chesapeake Bay, retrofitting our buildings for energy efficiency and solar panels, etc.) to subsidize a wealthy, coddled, monopolistic bunch of billionaires, especially when it’s almost certain that we won’t get any return on our investment and ESPECIALLY at a time when we’re running major budget deficits. So, Gov. McAuliffe, when Danny Boy Snyder comes a callin’, all you have to do is very simply just say “no.” You can slam the door in his face for dramatic effect (and bonus points) if you’re so inclined. 🙂