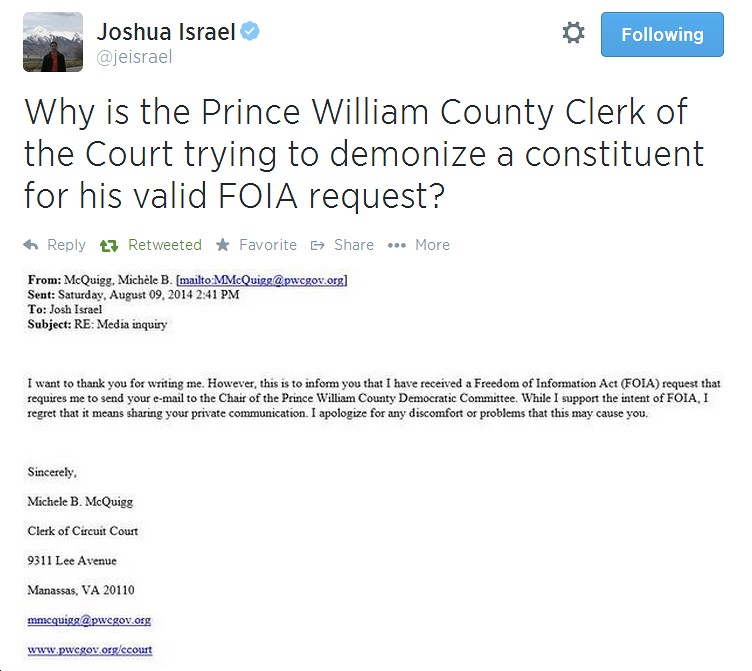 I had an interesting exchange with Josh Israel of ThinkProgress this morning. See Israel’s tweet (click to embiggen), including a screen shot of Prince William County Clerk of the Court Michele McQuigg’s strange email to him, in which she informs him that she will be sharing his “private communication” (an idiotic comment by McQuigg in and of itself, as nobody who emails a public official with a FOIA request would ever expect that email to be “private,” but whatever…). I asked Israel for further comment, and he responded as follows:

After Clerk of the Court McQuigg’s chief deputy [Bob FitzSimmonds] was again found to be making highly controversial comments, I reached out to McQuigg to see whether he spoke for her and where she planned to keep him in this position. A week and a half later, she has not responded to my question — even after he resigned as treasurer for the VA GOP — but she sent me this unusual email. I am well aware that my communications with public officials are subject to the Virginia Freedom of Information Act, but have never before seen an elected official publicly shame a constituent for seeking these public documents. It is also odd to me that she identifies that constituent based on his partisan political role, rather than by name.

Yes, it’s odd, but par for the course from McQuigg, from everything I hear about her. Anyway, I then reached out to the individual whose name McQuigg refused to use – Prince William County Democratic Committee Chair Harry Wiggins. According to Wiggins, he’s “gotten calls from about 7-8 people regarding McQuigg’s email,” with most of them seeing it “as an attempt at intimidation by McQuigg, particularly Muslims who have immigrated from countries where complaining may be lethal.” Charming, eh? Not.

Bottom line: McQuigg’s behavior is completely unacceptable coming from a public official. Note that McQuigg has also not uttered a word of rebuke to her subordinate, Prince William County Deputy Clerk of the Court Bob FitzSimmonds (also long-time Republican Party of Virginia Treasurer; we’ll see if he ever actually resigns from that position), for his anti-Muslim comments the other day. It almost goes without saying that she hasn’t taken any disciplinary action against FitzSimmonds, up to and including dismissal from his position. Why not? At this point, one would have to conclude that McQuigg agrees with FitzSimmonds’ views and has no problem with his behavior, including apparently writing his offensive diatribe during work hours, presumably from a Prince William County computer. As Prince William County Democratic Committee Chair Harry Wiggins notes, “The fact that [FitzSimmonds] posted the offensive diatribe while at the work place compounds the act.” Yet far from terminating FitzSimmonds, “at a recent meeting of community leaders,” McQuigg actually “attempted to defend him.” Just appalling.