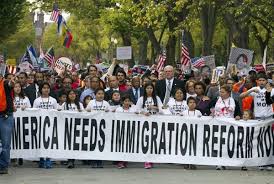 In 2010, the Democrats made what I felt was a great blunder in keeping the issue of the Bush tax cuts out of the off-year election campaigns.

The Republicans’ position was that all the Bush tax cuts should be preserved, and they were willing to hold the middle class tax cuts hostage unless they got their way.

But the Democrats avoided the confrontation, waiting until the lame duck session. (At which point, lamentably, Obama caved, not taking a strong stand until later.)

I thought that this issue was a perfect battlefield for the Democrats: 1) the people were on their side, and 2) the Republicans’ willingness to sacrifice the middle class to serve the rich brought into sharp relief the Republicans’ real allegiance to the big money.

But the Democrats were scared. They didn’t seem to believe that they could win the argument. So out of fear of losing the elections, they shrunk from the confrontation and lo and behold, they got slaughtered at the polls.

Caution and prudence are good. Being ruled by fear is often a disaster.

Now, President Obama has apparently been persuaded/pressured by Democrats — specifically, it is said, by vulnerable Democratic candidates for Senate — to put off taking the presidential action he promised on immigration reform.

Is this the same mistake all over again?

I recognize that it might not be. Opinion polls on an issue do not always indicate what side of the issue is a winner in an off-year election. The question isn’t what Americans tell pollsters, but rather: How many voters will vote differently (or vote at all) because of this issue?

So maybe in places like Arkansas or Louisiana, the President’s making a bold move on his own on immigration would cost the Democrats more votes than it would gain or, more specifically, would rouse more right-wingers to get themselves to the polls.

Immigration has a different place in the world of right-wing passions than tax rates on the richest 2 percent.

I agree that it would be better to wait a couple more months, if it is really true that the president’s taking action before the election would give more power to the Republicans.

But I do not feel able to trust the Democrats’ judgment on this issue. I don’t feel confident that the Democrats are capable of envisioning  what is possible for them to do with the issue.

Polls do show that Americans support making progress on immigration reform. Democrats should be able to make the case that there’s nothing extreme about the solutions proposed — W proposed immigration reform — and that important American values are at stake. Would it not be possible to get people to realize that the status quo just keeps a sore festering in the body of our nation?

There’s a fight that could be made. Have the Democrats fully envisioned how they could make this issue work for them, not against them, in this fall’s election?

Ever since Bush’s brain (Karl Rove) proved able to bully and out-maneuver the Democrats on issue after issue, the Democrats have been gun-shy when it comes to confrontations.

One of the two main parts of our national crisis is “the response from Liberal America to the threat of the destructive force on the right has been woefully weak.”

For such reasons, though I do not know if this is a repetition of the mistake of 2010, I find it difficult simply to trust that the Democrats’ decision is a good one.