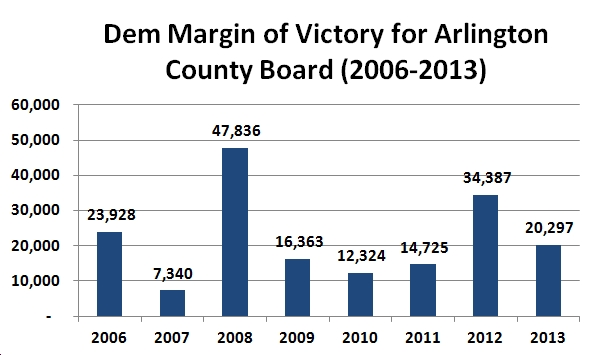 There are only a handful of truly competitive, interesting races in Virginia this year, and the Arlington County Board rematch between Republican John Vihstadt (note: he falsely claims to be an “independent,” even though he is a life-long/big-time Republican donor, activist, etc.) and Democrat Alan Howze is one of them. This past April, Howze lost a special election (to fill the seat Chris Zimmerman vacated with his resignation to take another job) to Vihstadt by a 57%-41% margin (12,667-9,109). The question is, with the much higher Democratic turnout we’ll be seeing in Arlington on November 4 for Mark Warner, Don Beyer, etc., is Howze likely to beat Vihstadt this time around? Here are a few numbers to chew on.

*As you can see from the graph, the Democratic margin for Arlington County Board has ranged from a low of 7,340 in the lowest-turnout-election “odd” year of 2007 (when no statewide candidates were on the ballot), to a high of 47,836 in the presidential election year of 2008 (when there was no Republican candidate for Arlington County Board on the ballot; only a Green Party candidate, who got 21,451 votes).

*In “federal, non-presidential election years” like 2006 and 2010, where the top of the ticket was a U.S. Senate candidate (Jim Webb in 2006) or a U.S. House candidate (Jim Moran in 2010), the Democratic margin of victory for Arlington County Board was in the range of 12,324 (in 2010) and 23,928 (in 2006). I’d say this election is most comparable to 2006, a non-presidential “federal” election with a U.S. Senate candidate at the top of the ticket in Arlington. That would imply a Democratic margin for County Board of 23,928, but…let’s continue crunching numbers before we start breaking out the champagne or anything like that. 😉

*The highest number of non-Democratic votes in an  Arlington County Board election came in 2012, when the Republican (Matt Wavro) and Green Party (Audrey Clement) candidates combined for 38,001 votes. The winner of that election, Democrat Libby Garvey, received 59,619 votes — a margin of 34,387 votes over Wavro, but also a Democratic “dropoff” for County Board from the top of the ticket (Tim Kaine for Senate, who received 82,689 votes) of 23,070 votes.

*Then, the question becomes, how much will Alan Howze’s vote total “drop off” from Mark Warner’s? If Howze “drops off” by 23,000, as happened to the Democratic Arlington County Board candidate in 2012, that would imply he’d get between 27,000 and 32,000 votes. Let’s say Ed Gillespie gets 20,000 votes in Arlington; that would mean John Vihstadt would need to outperform old “Enron Ed” by 7,000-12,000 votes in order to have a shot at beating Howze.

*Of course, it’s possible that Howze’s Democratic “dropoff” will be lower OR higher than 23,000. It’s also possible that Vihstadt might not outperform Gillespie, or might outperform him by even more than 7,000-12,000 votes. To do the latter, though, Vihstadt would have to get a LOT of Democratic crossover votes, mostly from “federal” voters who aren’t particularly focused on local politics (e.g., they probably didn’t vote in the April County Board special election; they don’t tend to vote in non-gubernatorial “odd year” elections).

*It’s also worth noting that Vihstadt’s an incumbent, albeit not for very long, having been on the County Board only 5 months or so. That might give him a bit of an advantage, but we’ll see.

Bottom line: I’d rather be in Alan Howze’s position right now than John Vihstadt’s, but there’s definitely a “path to victory” for either candidate. The main challenge, it seems to me, will be for Arlington Democrats to really cover the polls on election day and get those Democratic sample ballots in people’s hands, particularly “federal voters” who aren’t focused on Arlington County local politics. It will also be interesting to see whether the streetcar issue, which was so heated in the spring, might have cooled off by now, especially given the fact that since April, the Commonwealth of Virginia has announced it will be paying a big chunk of the streetcar’s tab (just yesterday, Virginia reiterated its commitment). Given that, and the fact that the streetcar is projected to be such a bon for Arlington County (especially since Arlington taxpayers are essentially not footing the bill), the question is whether the same one-issue, anti-streetcar voters, including Democrats who turned out in April to cast a “protest vote” for Vihstadt, do the same in two weeks? Will a lot MORE of those one-issue voters turn out to vote for Vihstadt? I’m very skeptical, but it’s certainly possible I suppose. Stay tuned…