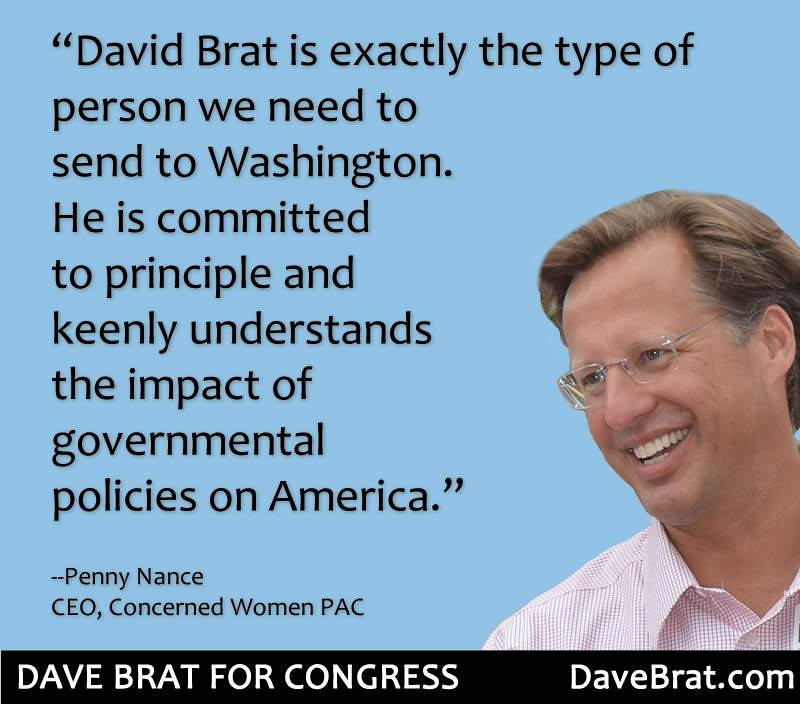 What is this “Concerned Women for America” (CWA) group, whose endorsement Dave Brat is touting? Here are a few “highlights,” courtesy of Right Wing Watch:

*”Founded by Beverly LaHaye, wife of Religious Right activist Tim LaHaye, as a counter to the progressive National Organization of Women…CWA opposes gay rights, comprehensive sex education, drug and alcohol education, and feminism, while advocating what it calls ‘pro-life’ and ‘pro-family’ values.”

*Has “been active in supporting the teaching of Creationism and ‘Intelligent Design theory’ in science classrooms.”

*”CWA vehemently opposed ratification of CEDAW (the United Nation’s Convention on the Elimination of Discrimination Against Women), claiming its pro-women empowerment and equality sections comprised a ‘leftist utopian wish list.'”

*”CWA has been active in the fight against using Harry Potter books in schools. Publications such as ‘Harry Potter: Seduction of the Occult’ claim that the books promote the practice of witchcraft among children. CWA offers books and videos such as, ‘Harry Potter: Witchcraft Repackaged: Making Evil Look Innocent.'”

*”CWA fights against sex education curricula that is not completely abstinence based and opposes anti-drug and alcohol abuse programs that emphasize self-esteem.”

As for Concerned Women PAC CEO Penny Nance, she recently cheered “the closure of [the University of South Carolina-Upstate’s] Center for Women’s and Gender Studies following several attacks from Republican politicians who threatened to cut funding from the school over an LGBT comedy event.” Last year, Nance claimed “that legal abortion ‘is the seminal human rights issue of our time’ and a ‘heart-breaking atrocity against mankind’ that is worse than the Holocaust.” Nance also blamed the “Age of Enlightenment and Reason” for leading down a slippery slope (don’t ask) to the Holocaust. More idiocy and buffoonery: Nance likened President Obama to “Tarzan” and essentially argued that “if Obama doesn’t defend women like Palin, Coulter and Bachmann, it is sexist, and if he speaks out on behalf of a Democratic official like Rice, it is sexist and a sign that liberal women are weak.”

Anyway, just thought you’d all be interested to know that Dave Brat thinks an endorsement from a bunch of crazy people is worth touting.

Definitely not smart to mess with @SenLouiseLucas! https://bluevirginia.us/2022/01/monday-news-can-sci-fi-wake-us-up-to-our-climate-reality-biden-cranks-up-pressure-as-putin-mulls-ukraine-invasion-acoupinplainsight-youngkins-masking-order-plunges-virginia-schools-i#comment-5706580770

Yep, this is Rob Wittman to a "t" https://bluevirginia.us/2022/01/monday-news-can-sci-fi-wake-us-up-to-our-climate-reality-biden-cranks-up-pressure-as-putin-mulls-ukraine-invasion-acoupinplainsight-youngkins-masking-order-plunges-virginia-schools-i#comment-5706532694 h/t @GerryConnolly