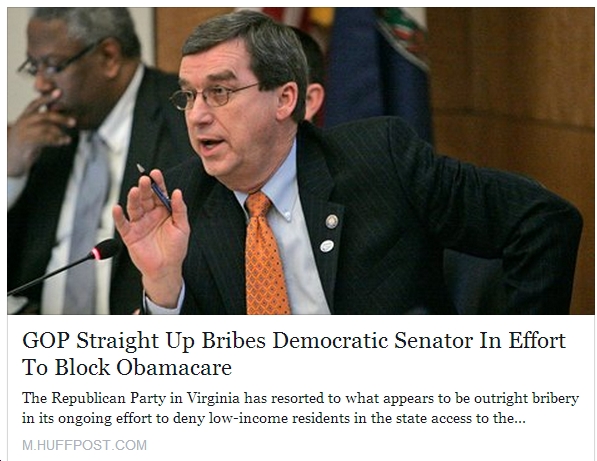 Can someone help me out with a Logic 101 problem? Yeah, I know, I shouldn’t have been dozing off during that class, but too late now to fix that. 😉 So, let’s see if I can lay out the logical chain Virginia Republicans like Ed Gillespie are using to attack Mark Warner right now.

1. A slew of emails, among other evidence, indicates that Virginia Republicans like Del. Terry Kilgore (chairman of the slimy state tobacco commission) offered jobs to then-Sen. Phil Puckett (D) and his daughter in exchange for Puckett quitting the State Senate and throwing that body to the Republicans.

2. Republicans have argued variously for months that they a) did absolutely nothing wrong, or b) that even if what wend down was a bit slimy, it certainly wasn’t illegal, or…whatever. The bottom line is they argue they did nothing wrong in offering what many of us would consider a “quid” (jobs for Phil Puckett and his daughter) in exchange for a “quo” (Puckett resigning and throwing the State Senate to the Republicans’ control).

3. Meanwhile, god knows how many Democrats called the Pucketts to urge, encourage, or possibly also offer everything but the kitchen sink in order for Sen. Puckett to NOT resign from the State Senate and throw that body to Republican control. Cue up the false equivalency and IOKIYAR (“it’s ok if you’re a Republican”) “logic” – see, “both sides” did it, ergo what Republicans did was no worse, if it was even wrong at all. Except that, according to Republicans, what they did was fine but what Democrats (e.g., McAuliffe Chief of Staff Paul Reagan, he of the infamous voice mail saying “we would basically do anything” to keep Puckett on board) did in trying to KEEP Sen. Puckett from resigning, was bad bad BAD! Again, even as what REPUBLICANS did, in trying to essentially bribe Puckett to resign and throw the State Senate to Republican control (a classic quid pro quo) was fine. Or something.

4. Now, Republicans are busy bashing Mark Warner, who admittedly spoke to Sen. Puckett’s son Joe – exactly what was said is not known, but Warner says it was a “brainstorming” session with/about an old family friend – for a “breach of ethics,” while simultaenously ignoring (and/or actively arguing) that Terry Kilgore et al. did nothing wrong in offering Phil Puckett and his daughter jobs if Puckett resigned and threw the Senate to Republican control.

5. Of course, Terry Kilgore would have literally had ZERO motivation other than to get control of the State Senate to help convince Phil Puckett to resign.

6. It’s worth reiterating that what started this whole chain of events was Republicans attempting to, essentially, bribe (use the word “entice” or “convince” if “bribe” is too strong for your sensitive stomach) Phil Puckett to resign and throw the State Senate to their control. It’s also worth reminding everyone that one of the main things at stake in all this was getting hundreds of thousands of Virginians covered under expanded Medicaid, as well as recouping billions of our own tax dollars that are currently not coming back to Virginia, as they should be. So, on top of their slimy (possibly illegal; FBI is investigating) quid pro quo offer to Phil Puckett to get him to resign from the State Senate, Republicans also were working hard to screw poor Virginians – and all Virginians – out of health care coverage and their own money. If that’s not unethical, I’m not sure what is.

7. Finally, now we have slimeball “Enron Ed” Gillespie of all people, sanctimoniously shaking his head about how “Washington” supposedly “changed Mark Warner” and turned him into an unethical monster (for talking to Joe Puckett), while completely ignoring what his OWN PARTY did to kick this whole fiasco off in the first place. Barf inducing.

So…can anyone help me out with the glaring, internal flaw in the Republicans’ internal “logic” (using the world loosely) here? Anyone who didn’t doze off during Logic 101 class, perhaps? 🙂