According to right-wing extremists (and overall nutjobs) Del. “Sideshow Bob” Marshall and Sen. Dick “Plastic Fetuses and Raging Homophobia” Black, Virginia should use its “police powers..to protect our citizens and residents from exposure to Ebola even if it means a timely court challenge against passenger airlines or the federal government if they continue to permit entry into Virginia of passengers flying from Ebola affected areas.” Rather than, say, Republicans funding health authorities like the CDC and NIH, or maybe confirming a Surgeon General, or perhaps providing grants and training to equip hospitals, or…oh forget it, fearmongering is so much easier. By the way, as one high-ranking Virginia Democratic elected official sarcastically messaged me about this, “Does the governor control the FAA now?” Meanwhile, as the Washington Post reported, “In airports in all of the affected regions and across the world, passengers coming from flights from West Africa are [already] being screened for elevated temperatures,” and “If a passenger is sick or has a fever, they won’t fly.” In addition, “More flight restrictions will only make it more difficult for life-saving aid and medical professionals to reach West Africa.” As the World Health Organization explains, “Any discontinuation of transport will affect humanitarian aid, doctors, nurses and human resources entering the country, the transfer of biological sampling and equipment for hospitals.” Other than all that, “Sideshow Bob” and Dick Black are really onto something here. (snark) 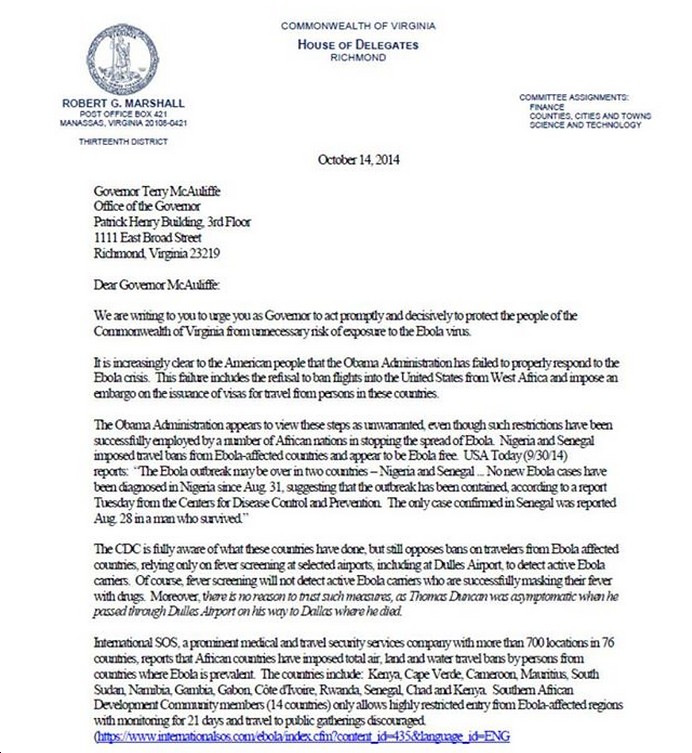