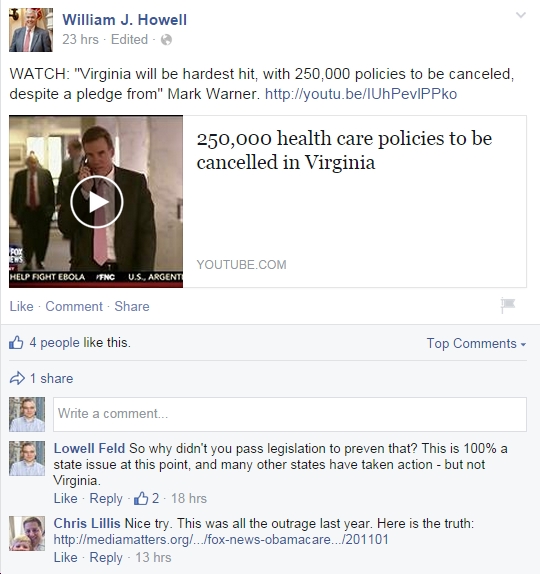 This is definitely shaping up as Virginia Republicans’ Big Lie of 2014: that supposedly President Obama is responsible for 250,000 health insurance policies being canceled in Virginia. In fact, as Mark Warner spokesperson Kevin Hall correctly points out, “Federal policy allows states to continue to give consumers the option of keeping their existing plans, so this is now a state issue.” Hall adds, “Thirty-seven states, including North Carolina, have already done that, and the Virginia General Assembly can and should do the same.”

The question, then, is why hasn’t the Republican-controlled Virginia General Assembly acted to fix this, since those same Republicans claim it’s such a big problem? (My exact question to Howell was: “So why didn’t you pass legislation to prevent that? This is 100% a state issue at this point, and many other states have taken action – but not Virginia.”) It’s not like there wasn’t a bill introduced (see SB 5012 Health benefit plans; renewal of nonconforming policies by Sen. George Barker) in the recent special session.

So what did Republicans DO with this bill, given that they are supposedly SO concerned (note: they’re really not concerned at all, but are simply using this to score cheap political points) about those 250,000 Virginians (even as they are NOT concerned with hundreds of thousands more Virginians who desperately need Medicaid expansion)? Why, of course, they acted on it right away seriously considered it shunted it off to the Committee on Commerce and Labor, where it’s currently languishing.

So, bottom line: next time you hear Bill “ALEC” Howell, ethically challenged Barbara Comstock, or any other Republican cry crocodile tears on this issue, just hand them a Kleenex and give them a hug. Either that, or tell them where to shove their Big Lie.