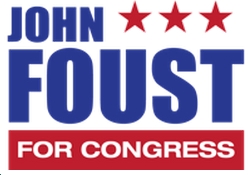 Good news from the Foust for Congress campaign (apparently, as much as many of us find the fundraising emails to be annoying, the work!). 🙂

Real Clear Politics Changes Campaign Ranking to “Toss Up”
FAIRFAX, Va. – Following a recent poll showing VA-10 as statistically tied and Real Clear Politics changing the race’s ranking from “Leans GOP” to “Toss Up,” John Foust’s campaign today announced that it raised over $1 million in the most recent reporting period.
Foust’s record-setting quarter makes him one of only a handful of congressional races this cycle nationwide to raise more than $1 million in a single quarter.
“I’m so grateful for the outpouring of support we’ve received – this is another strong signal that our message of bringing the commonsense, bipartisan leadership that we practiced in Fairfax back to Washington is resonating,” said John Foust. “We balanced seven budgets, cut millions in wasteful spending and used the savings to invest in our community and create an environment that attracts jobs – and that’s exactly what Congress should be doing. But the more Northern Virginians learn about Barbara Comstock’s right-wing agenda, the more clear it becomes that she can’t be trusted to speak for us.”
Foust’s fundraising momentum expanded on a strong grassroots base from previous quarters. While the numbers are not yet final, an estimated 99.5% of the Foust's contributions from July through September came from individual donors. Approximately 94% of those individuals’ donations were $200 and under. Foust had nearly twice as much cash on hand last quarter as Comstock, and continues to outperform her campaign in fundraising, on the air, and on the ground.
BY THE NUMBERS:

It's truly astounding how much positive progress Virginia has made in less than a year of Dems controlling the General Assembly. Elections - including the one on 11/3 - REALLY MATTER! https://bluevirginia.us/2020/10/thursday-news-trump-bet-against-science-and-voters-are-casting-judgment-finally-the-resistance-gets-to-vote-we-have-to-destroy-the-republican-party-in-order-to-save-it-no-one-mocks#comment-5129405589