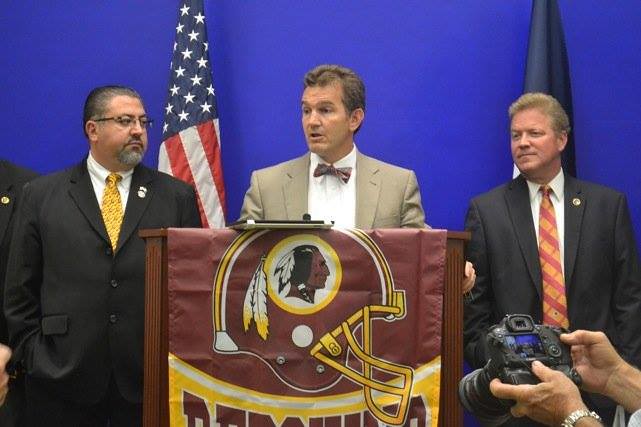 Yesterday State Senator Chap Petersen posted some thoughts on Facebook about what he called “the latest scandal du jour in the VPAP clips.” It was a rather nonchalant introduction to some surprising comments:

I’ve known Paul Reagan for fifteen years, as an official for Mark Warner, Jim Webb and now Terry McAuliffe. (Back in the 90′s, he also served on the Consumer Protection Commission, where I used to appear as an attorney). I regard him as one of the most honest and reputable people I’ve met in Virginia. Nothing he said or suggested with Senator Puckett has changed my opinion. I’ll leave it at that.

Because, as we all know, people with long and distinguished careers in public service never wreck those careers and self-destruct by breaking the law. No, that never happens.

The next “thought” Senator Petersen rolled out was this:

The Puckett investigation is a road to nowhere and we’re slowly getting there. While Phil’s actions in resigning just before a key vote were wrong (in my humble opinion), that is a matter between him and his friends. It does not involve the U.S. Attorney. This is not “McDonnell Part Deux.” There is nothing illegal about resigning from a public office to take a better-paid position, either with the private sector or with state government. If it was, then you could lock up a lot of people in River City right now.

It’s true enough that people often leave good jobs for better jobs. Indeed, that used to be the American dream, to build a career by taking a series of increasingly challenging jobs, succeeding in them, and moving on to better compensated opportunities. That’s not what Phil Puckett did. Phil Puckett tried to trade control of the Virginia State Senate for not one, but two six figure jobs with the state judiciary and the state tobacco commission–the first for his daughter and the second for himself. There is a strong possibility that this attempted exchange of influence might be a violation of federal public corruption laws. It stretches credulity to suggest that Petersen–by all accounts a talented attorney–does not understand that.

But Petersen did not stop there; he dug deeper:

The Puckett resignation was never about his taking a job with the Tobacco Commission or allowing a full-time judicial position for his daughter. (Neither of which has happened to date). It was about THE TIMING. In June, the Senate budget still contained Medicaid expansion through “Marketplace Virginia,” but we needed a couple more weeks to enact that in the final state budget. Phil’s resignation killed that opportunity. It also cost us the majority – but that’s a separate issue.

I found this “thought” more than a little surprising, because Petersen really should be aware that a pretty substantial e-mail chain strongly suggests that Puckett’s resignation was ALL about procuring well-paid jobs for himself and his daughter. Petersen’s assertion that none of this matters because they never got to take the jobs is a little like saying that a bank robber shouldn’t be prosecuted (or even investigated) if they get caught and can’t complete their crime. Seen in this light, Petersen comes off as the frustrated beat cop standing in front of a bank with a smashed in front window and robbery alarm blaring: “move along folks, there’s nothing to see here,” Petersen seems to say.

Because after all, what cause have Virginia’s elected officials given the people of Virginia to worry about the standard of ethics in Virginia’s government? What possible cause for concern could we have?

Witness what happened to Bob McDonnell. For months he and his lawyers argued–apparently with straight faces–that nothing McDonnell had done had violated Virginia state law. They were correct . . . and it was completely irrelevant to the question of whether FEDERAL law was violated. A jury convicted McDonnell of 11 out of 12 FEDERAL charges.

If Virginia’s legislators can’t be bothered with protecting Virginia’s reputation, you would think at least that they would legislate a set of clear cut ethics rules that reflect at least a basic understanding of what is required under the federal rules in order to protect themselves. An ethics “system” in which nothing is illegal under Virginia law but much is illegal under federal law is going to provoke one federal investigation and prosecution after another.

Now maybe Phil Puckett will be prosecuted and maybe he won’t. I also have no doubt that many people think Paul Reagan is a great guy. Lots of people think Bob McDonnell is a great guy too. A lot of people who said last year that nothing would happen to McDonnell ought to be eating crow right now, but I don’t know any who have.

Virginia’s General Assembly does a disservice to ALL VIRGINIA PUBLIC SERVANTS by failing to pass a set of ethics rules that reflects how federal ethics laws operate.

If the General Assembly can’t pass real ethics rules then it ought to repeal all of Virginia’s phony ethics laws and replace them with a simple note indicating that Virginia has outsourced ethics to the federal government and the federal code, regs, and case law should be consulted as to what constitutes ethical and legal conduct for public officials, whether elected or appointed.

The Virginia General Assembly has proven itself completely incapable of self-regulation. As Virginians, we are forced to rely on the two U.S. Attorney offices in Virginia to try and put some kind of limit on the bad behavior of Virginia’s elected officials, and we’re expected to think that there’s nothing wrong with this state of affairs?

“Move along folks, there’s nothing to see here.”