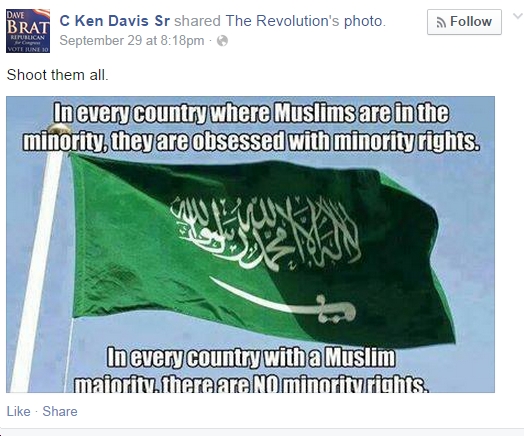 Heard of Ken Davis Senior? He’s one of the Top Ten Reasons Eric Cantor Lost, and, by the looks of his Facebook, keenly interested in seeing Muslims murdered.

He also says all business should be Muslim-free and refers to Muslim incest breeding. Screenshots exist in case he decides to take his Facebook private… the whole page is truly a living testament to ignorance.

Appears that this guy has been very involved in the Brat campaign (it’s not clear if anyone’s actually paid him for anything) and has been a core part of the team for a while, organizing walks, phone banks, what have you.

It’s disgusting that David Brat has these kinds of people executing his campaign.