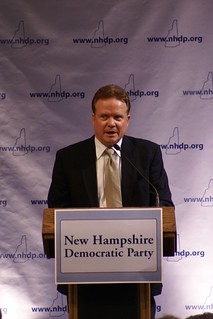 Former Secretary of the Navy, Former Virginia Senator Jim Webb is the first out of the box for the 2016 Democratic Party Presidential nomination hunt.  This announcement has garnered its attention and analysis. (For example, over at DailyKos, Markos has a biting (and to me, generally accurate) review of Webb’s announcement video in the context of Democratic Party primary politics and TeacherKen put up a sympathetic reflection on Jim Webb.)  And, some attention is turning to Webb’s positions on policy arenas.

While Webb is far from the stage of having formal policy issue statements, he does have a record of action and statements to examine.  Over at Grist, Ben Adler put up a searing review of Jim Webb and climate/environmental issues:

…in the Senate, Webb was a “climate curmudgeon,” [who worked to undermine Presidential authority to negotiate climate treaties, fought against the Environmental Protection Agency, etc.]…And on climate change, by far the most monumental environmental issue, Webb may be little better than the Republican Party to which he once belonged.

During his Senate term, Webb:

As Kate Sheppard put it,

As Ben Adler put it,

it’s a problem that Webb sucks on climate change. The next president has to be a climate hawk. We’re rapidly running out of time to stave off the worst effects of warming.

As many others did — especially members of the Raising Kaine ‘community’ — I worked to get Webb elected.  On my own dime, for example, I created and printed several thousand copies of a two pager outlining Webb’s biography and why he merited support/being elected. It was a positive biography message that I distributed from ‘Draft Webb’ timeframe into the general election.  When flying out of Dulles, for example, I would arrive an hour early and put this on 100s of cars in the parking lot (believe that this totaled more than 5000). And …

Jim Webb was a wonderful option compared to George Allen.

He is a brilliant writer. He has served his nation. And, his intellect can be engaging. And, I do believe that he is principled.  And ….

One of the main reasons that I felt comfortable (even compelled) to take my time to help elect Jim Webb was my respect for his intellect and a belief that he would be open minded to listen and assimilate information about issues where he had focused little attention in the past — such as energy and climate.

He did not just disappoint me as my Senator but I felt betrayed.

On energy & environmental issues, he was — and remains — arrogantly oblivious to the serious challenges we face and the opportunities before us.

While Jim Webb was a marvelous option compared to Allen and would be far better than anyone I expect that the Republican Party will nominate, it is hard to imagine that he will be the best option in the Democratic Party primary.

There is no way that he merits our support for the Democratic nomination without his showing a serious reevaluation of his perspective and objectives on environmental and energy issues.

That is — hard to imagine unless he makes a meaningfully significant effort to educate himself re climate change (and the scientific consensus on climate change), its implications for America and Americans, and the very real benefits that can accrue to US (to all of us) from serious climate action.

I do believe that Jim Webb has the intellectual 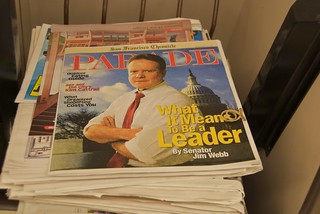 capacity and honesty to be able to learn from actual experts, assimilate what he learns, and come to a substantive understanding of climate change/climate disruption/climate chaos risks and the very real opportunities that can come from climate change mitigation (related) investments.

As to that last item, addressing climate change offers some of the most fruitful paths to address core Webb issues of economic equity (advocates of cap & dividend lay out how it will strengthen the middle class), creation and maintenance of good quality jobs for Americans, strengthening the economy (for all), national security (including improving the effectiveness of Marines in combat zones), etc …

Jim Webb certainly has the capacity to learn and assimilate such material into his Weltanschauung and to become a leader to bring America toward a sensible energy and climate policy. Sadly, he has shown no indication of a willingness to do so to date to me and others.  As Lowell Feld put it,

Sadly (and it truly is sad for me, as someone who led the “Draft James Webb” effort and who worked for his campaign), it doesn’t seem that he has much if any understanding – or even curiosity to learn – about energy and environmental issues.

We simply cannot afford to have a President who is indifferent to climate change issues and is against the very basic concepts of the necessity and value of environmental regulations.