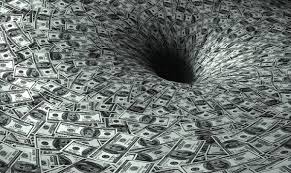 This piece appeared recently in the Richmond Times Dispatch.

In its opinion in Citizens United, the Republican-appointed Supreme Court majority pretended it wasn’t true. But every sane person knows otherwise: allowing unlimited money to flow into our election process corrupts our democracy. “One person, one vote” gets replaced by “one dollar, one vote,” which means that the increasing inequalities of wealth in America subvert the democratic idea of equality of political voice among all citizens.

But less obviously, allowing money to buy political power corrupts not only the political system, but the money system as well.

I used to call out the Koch Brothers, for their campaign to misinform the public about climate change, as being not only immoral but also a kind of crazy. What kind of insanity is it, I asked, for billionaires who already have more money than they and their children and their grandchildren could spend in a lifetime, to damage the future for generations to come, and for life on earth generally, just to get still more money for themselves?

I was thinking of money as something that entitles the owner to get economic goods. And for billionaires like the Koch Brothers, the limit to the goodies they might benefit from consuming or owning has long since been passed.

But in a political system like the one being fashioned by things like the Citizens United  decision, money isn’t about acquiring economic goods in the pursuit of happiness. It is about buying the government in the pursuit of power.

The heart of the matter is this: economic expansion can be synergistic, a process in which everyone gains; but power is a zero-sum game, meaning that there’s only so much to go around, and so one person’s gain is necessarily offset by someone else’s loss.

To put it another way: we can all get richer together, but we can’t all get more powerful together.

So letting money buy power removes all barriers to greed, because what looks at first like insatiable greed can really be an insatiable lust for power.

But it’s not only the Koch Brothers conduct that can be warped by this undemocratic translatability of money into power over the American government.

The American economy worked great, a half century ago, when the CEOs of our corporations earned some 20-40 times as much as the workers on the shop floor. Now they earn 200-400 times as much, and the economy is not working as well.

Inequalities of income and wealth have expanded hugely in recent times. It’s well established that great economic inequality hobbles economic growth.  The flow of money to the rich doesn’t create nearly as much demand for more goods and services as money going to average families, because it is those with less who need to spend more of what they get. Funneling more money to the rich and hollowing out the middle class thus leads to a more sluggish economy.

It used to be that as the productivity of American workers increased, their wages would increase proportionally. But over the past decade and a half workers, have stopped getting their share of the gains of that productivity growth, and all the gains have gone instead into corporate profits.

But that channeling into corporate coffers of all the economic gains has helped keep our economy in the ditch. Corporations have been slow to invest or produce more because they see there’s no demand for such extra production. The demand in our economy is weak – and the lack of aggregate demand is why our recovery has been so slow – because average American families are not getting their fair share of the bounty they help to produce.

So this pursuit of more and more wealth by those individuals and corporations who already have enormous riches is a major impediment to restoring America’s economic health.

But while the present flow of money to the haves from the have-nots makes no economic sense – let alone no sense in terms of our values of fairness for average people and concern about their well-being-it makes more sense the more that money is allowed to buy control over the government of the United States.

Greed and the lust for power have been able to combine forces, thanks to the advance of plutocracy abetted by Supreme Court decisions like Citizens United. They make a deadly combination.

Not only does this deadly mix corrode the democratic values embedded in the political system our founders bequeathed us. But they also corrupt and damage our once-dynamic economy.