I’ve actually seen a couple high-ranking Virginia Democrats argue that Tuesday wasn’t so bad, that to say it was a disaster is an overreaction or whatever. For instance, DPVA Chair Dwight Jones sent out a Panglossian email which actually asserted, with no apparent irony or self awareness, “Today is a good day for Virginia Democrats” (in what conceivable universe, parallel or otherwise, would that be the case?!?), that we had “so many great races and Democrats made the party proud, regardless of the outcome” (uhhh…examples of “great races” please?) and that “as we saw in our races, when the party is able to effectively communicate with its base, Democrats win” (actually, what we saw was the opposite – when Democrats disrespect/ignore the base, run away from/fail to tout their own accomplishments, adopt Republican framing, offer no comprehensive econoimc vision for the future, play the false equivalency/”both sides” game, etc., etc, they get their butts kicked). To this utterly delusional “thinking,” I present this article. 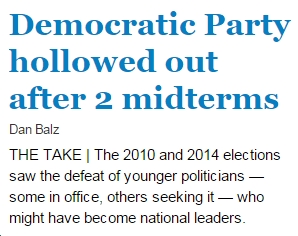 *”The more serious problem for Democrats is the drubbing they’ve taken in the states, the breeding ground for future national talent and for policy experimentation. Republicans have unified control – the governorship and the legislature – in 23 states, according to the National Conference of State Legislatures. Democrats control just seven. Democrats hold 18 governorships, but only a handful are in the most populous states.”

*”Without prominent statewide elected leaders, Democrats are in danger of seeing their state party structures atrophy. This has happened in Texas over the past two decades, ever since Republicans seized control of the politics of the state.”

Think about it, both nationally and right here in Virginia. For instance, in 2009 and 2011, Virginia Democrats were wiped out in the House of Delegates, dropping from 44 to 32 seats, and losing a bunch of really good people (e.g., Margie Vanderhye lost to…yep, Barbara Comstock; Chuck Caputo lost to Jim LeMunyon; Joe Bouchard lost to Chris Stolle). Today, we remain basically decimated in the House of Delegates, while Republicans like Barbara Comstock are on their way to Congress. ugh. In 2010, we lost rising star Tom Perriello. In 2013, we managed to pick up a net of ZERO House of Delegates seats, again leaving us decimated in that chamber. So much for our “farm team.” Same thing nationally, sad to say. So how was this past Tuesday anything but an unmitigated disaster? Got me.

.@Vangie4Congress: “I drove through Manassas…If you want to know what an angry black woman sounds like, this is it.” https://bluevirginia.us/2020/05/vangie-williams-i-drove-through-manassas-if-you-want-to-know-what-an-angry-black-woman-sounds-like-this-is-it via @bluevirginia