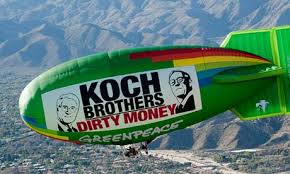 Cross posted from Scaling Green, because I think this is highly relevant to Virginia (where Bill “ALEC” Howell is Speaker of the House, and where Dominion and other fossil fuel interests have bought and paid for our state government)

As we know, the billionaire Koch brothers and their fossil fuel allies have been waging relentless war against clean energy for years now. Yet, as this fascinating article in National Journal explains, while the Koch-funded group Americans for Prosperity (AFP) has seen some successes at the national level in fighting clean energy, they are larging striking out in the states.  Why is this the case?  A few key points from the National Journal article answer that question.

In sum, the National Journal article demonstrates that no matter how much money fossil fuel interests spend to attack clean energy, it’s difficult for them to win those battles due to wind and solar’s strong, bipartisan support across America.  Of course, that doesn’t mean the fossil fuel folks are going to give up, which means that cleantech must stay on top of this situation. Still, the bad news for the Koch brothers and their allies is that, with the clean energy industry growing by leaps and bounds, the political clout these industries wield will continue to grow as well. And the bottom line is that, even in “red states” like Kansas, politicians of all political stripes can clearly see which way the wind is blowing.