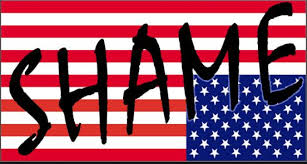 Shame on us, the American People.

Giving more power to a Republican Party that has has been blatantly indifferent to the good of the nation.

Never in American history has there been a party so consistently destructive in its impact on America. Indeed, it is hard to find an instance these past six years when the Republicans have even tried to be constructive, tried to address our national problems.

Never in American history has there been a party so consistently dishonest in its communications to the people.

To know of this unprecedented  betrayal of the nation, we have no need of secret tapes or conspirators coming forward to testify. It has been there undisguised, right in front of our eyes.

Yet, yesterday, tens of millions of Americans who are unhappy with “Congress” for its record-setting failure to take care of the nation’s business voted for the party that deliberately worked to make Congress fail.

Shame on us, the Democratic Party.

Once again running timidly (2002, 2010), the Democrats have failed not only themselves but the nation.

Clearly, the American people need help in seeing the monstrosity the Republican Party has become. But the Democrats — either blind to that reality, or afraid to speak of it — did not give them that help.

The Democrats should have helped the American people see how wantonly the GOP has trampled upon the ideals and traditions of our American democracy.

But they didn’t. And now the Republican strategy of seeking more power for themselves by creating problems they can blame on their opponents has been rewarded.

We live in a time of great darkening.

If the people at the top of the Democratic Party are incapable of rescuing our democracy from (what FDR called) “the forces of selfishness and of lust for power,” we in the grassroots will need to find a way to take up the job ourselves.

See the evil. Call it out. Press the battle.

The stakes are just too high. Are we willing to work to save our democracy from this ongoing power grab from the plutocrats whose instrument the Republican Party has become? Are we willing to work to assure that our nation acts responsibly in the face of the mounting danger of environmental catastrophe from the disruption of our climate, which the Republican Party has made it dogma to deny?

If not, then shame on us.

Kellen Squire: Young White Men Like the Buffalo Terrorist Are Radicalized Online; We Need a Systemic Effort to Fix This