In 2012, Virginia consumed 108 terawatt-hours (TWh) of electricity. Currently, most of that is generated using health-and-environment-trashing coal and natural gas, plus super-expensive nuclear plants. Yet, according to this new fact sheet from the Southeastern Wind Coalition (data sources: Lawrence Berkeley National Lab, US Energy Information Administration, American Wind Energy Association), Virginia has the potential within just 5-10 years to produce 258.4 TWh/year — more than twice the entire amount of electricity Virginia consumed in 2012. 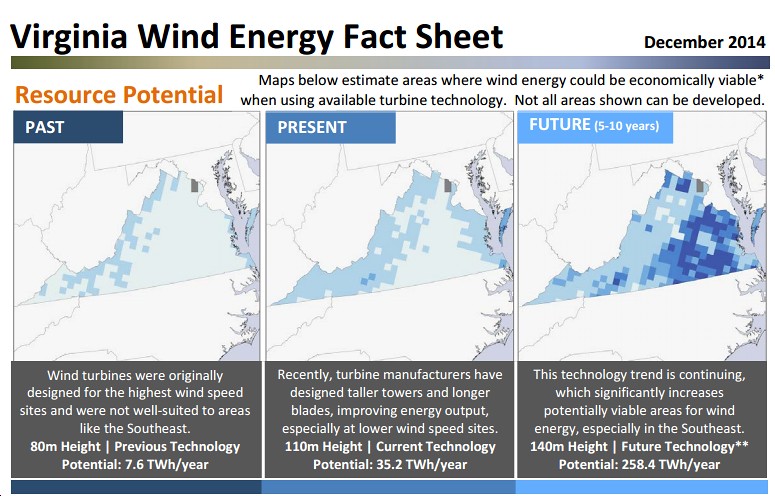 NREL estimates the technical potential within 50 miles of the coast of VA, NC, SC, and GA to be about 583 gigawatts, which which is equal to about two times the electricity demand of every coastal state from Maine to Florida. This region has the potential to be a significant exporter of offshore wind energy.

That’s right; not only could we produce ALL our power from wind, but we could produce enough to export, potentially earning billions of dollars for Virginia’s economy. Of course, offshore wind power is more expensive than onshore wind power, but as with everything else, costs will come down sharply once we start building in this country “to scale” (see this study for some thoughts on that topic). Also keep in mind that wind power emits no health-and-environment-damaging pollution, whether we’re talking about greenhouses gases, toxix substances of various kinds, particulates, whatever. Offshore wind power doesn’t blow up mountains. It doesn’t “spill.” It doesn’t contaminate our water supplies or require massive amounts of water to produce it, as “fracked” natural gas does (in fact, wind power requires ZERO water to produce). It’s not even an “eyesore” (assuming you find wind turbines less attractive than, let’s say, a coal-fired power plant), since it would be located well offshore.

So what’s the holdup? Basically, it’s two major things: 1) counterproductive, dysfunctional, nonsensical, or to be nice “suboptimal” public policy, which massively subsidizes fossil fuels, while tilting the playing field in a myriad of other ways (e.g., not correcting for market failure by imposing a sizable tax on fossil fuel’s pollution) against clean energy and in favor of dirty energy; and 2) the fact that offshore wind power currently costs somewhat more than heavily-subsidized, non-internalized fossil fuels (although see the graph on the “flip” regarding cost trends for onshore wind vs. natural gas).

Of course, to correct #2, we need to fix #1. But given that policy is set by a bunch of people, like Virginia House Speaker Bill “ALEC” Howell, who are really not much more than bought-and-paid-for puppets of the fossil fuel industry, this problem isn’t going to be easy to fix. The clear answer: vote all these guys out of office, while simultaneously imposing strict campaign finance and lobbying limits. Then we’ll see what happens… 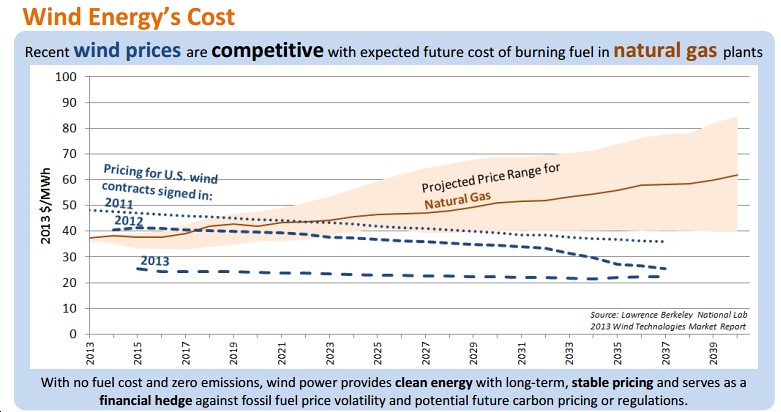