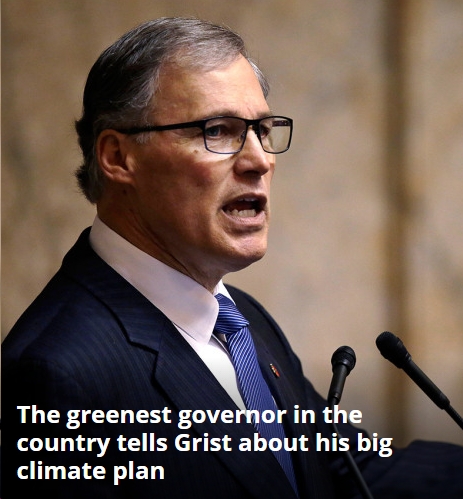 The other day, I highlighted California Gov. Jerry Brown’s State of the State address as a model for state-level energy and climate policy. In Gov. Brown’s speech, he set ambitious goals: increasing “from one-third to 50 percent our electricity derived from renewable sources;” reducing “petroleum use in cars and trucks by up to 50 percent;” doubling the efficiency of buildings in the state. He further laid out a vision for “more distributed power, expanded rooftop solar, micro-grids, an energy imbalance market, battery storage, the full integration of information technology and electrical distribution and millions of electric and low-carbon vehicles.” As I noted, all of these things would be superb to see in Virginia, and I encouraged Gov. McAuliffe to be as bold, as “big ideas” as Gov. Brown, in his State of the Commonwealth speech tomorrow.

If Gov. McAuliffe needs more ideas, he should read The greenest governor in the country tells Grist about his big climate plan – an interview between David Roberts of Grist and Washington State Gov. Jay Inslee. Recently, Gov. Inslee “unveiled an ambitious policy agenda anchored by two interlocking pieces”: 1) “a carbon cap-and-trade system, the revenue from which will be divided among transportation, education, and assistance for low-income Washingtonians and affected industries”; and 2) “a 10-year, $12 billion transportation plan…funded by a combination of carbon revenue and more traditional sources – the gas tax, license fees, etc.”

Of course, our Republican/Dominion-controlled, fossil-fuel-bought-and-paid-for General Assembly wouldn’t approve such a plan, but that’s no reason not to tell the people of Virginia what needs to be done, what should be done, for our economic and environmental future. I’d also point out that Washington State has a Republican-controlled Senate and a narrowly-divided House, so it’s not THAT much different in some ways there than it is here.

Another great idea comes from Virginia Delegate Ron Villaneuva (R-Virginia Beach), as outlined in this op-ed in this morning’s RTD. In sum, here’s what Villaneuva’s bill, the “Virginia Coastal Protection Act,” would do:

*”By joining the state into the highly successful and fully established Regional Greenhouse Gas Initiative, or RGGI, the bill would generate more than $200 million per year in new state funds to invest in coastal adaptation and other climate change solutions.”

*”The Virginia Coastal Protection Act is a win-win-win solution. We can establish a consistent and significant source of revenue to tackle flooding in Hampton Roads and generate funds to invest in other statewide priorities, while putting policies in place to help Virginia meet carbon reduction goals in an efficient and practical manner.”

Given that Virginia will have to meet EPA Clean Power Plan goals regardless, and given that switching to clean energy would constitute a huge boost for Virginia’s economy, what Del. Villaneuva (R) is proposing should be a no-brainer for everyone to get on board with. As an added bonus, note that since 2008, “electricity prices have dropped by 8 percent in participating [RGGI] states, compared to a 6 percent rise throughout the rest of the nation.” Lower electricity prices and carbon pollution combined with additional revenues for coastal adaptation, workforce development, education and economic assistance in SW Virginia? Why would anyone, other than the fossil fuel companies and the politicians they’ve bought and aid for, oppose that? Got me.