Sadly, the following crap is not surprising, coming from someone who founded a “news” channel based on ignorance, disinformation, anger, spewing intolerance, and pandering to “hateful idiots” (like Richard Murdoch himself). In this case, Murdoch makes the “argument,” if one can even call it an “argument,” that 1.8 BILLION world Muslims are collectively responsible for the actions of a few violent extremists. By that “reasoning” (again using the word loosely), I guess all Jews should be responsible for this guy; all Christians should be responsible for this guy, etc. It’s not just crazy, it’s a dangerous and destructive line of thought that should be utterly rejected by everyone, at least by everyone who isn’t a “hateful idiot” him/herself. 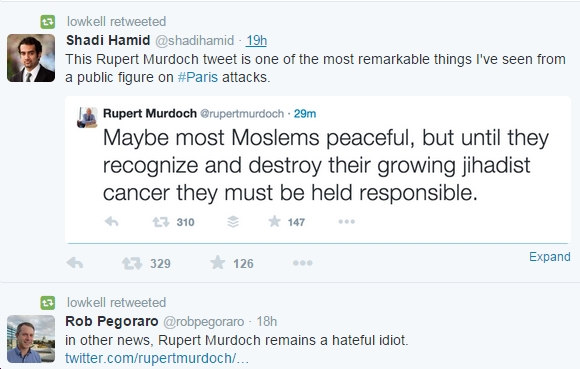 Abigail Spanberger Responds to Outrageous, Recycled Ad Attempting to Associate Her with Terrorists