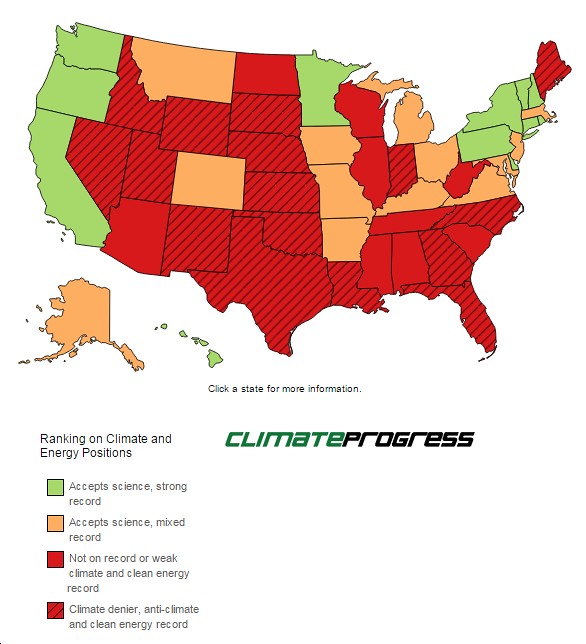 Over at the Center for American Progress (CAP), they do a lot of great work, including on energy and the environment. For instance, this morning they came out with their “2015 Climate Guide To Governors,” which ranks the 50 governors into three categories:

Green governors not only accept climate change science but are proactively implementing policies to fight climate change and prepare their states for the impacts of extreme weather. Orange governors either accept climate science or have not openly denied it but also either have mixed climate and energy records or have not yet taken serious action to help their state prepare for its impacts. If a governor has made no public statement on climate science, has not taken action, or has openly objected to federal safeguards that help blunt the impacts of climate change, they are placed in the red category. Governors who deny the reality of mainstream climate science are added to the red “Climate Deniers” category, further marked by striped lines.

Obviously, I was most curious about how Virginia’s governor, Terry McAuliffe, stacked up. The answer, according to CAP (which, by the way, has close ties to McAuliffe’s good friends the Clintons)? Kinda “meh,” frankly. Most glaringly, McAuliffe isn’t considered to be “green,” but “orange,” ranking behind the governors of California, Connecticut, Delaware, Hawaii, Minnesota, New Hampshire, New York, Oregon, Pennsylvania, Rhode Island, Vermont, and Washington State when it comes to promoting climate action and clean energy.

Why does McAuliffe rank below all those governors on energy and the environment? CAP lists three major problems:

In response to the economic struggles the coal industry has deal with in the Commonwealth, McAuliffe said carbon capture and sequestration (CCS) technology was the answer, calling jobs in CCS-equipped coal plants the “jobs of the future.” He is the only Democrat to join a coalition of governors supporting efforts to open the outer continental shelf to oil and gas exploration, and has had to defend his support for a propose natural gas pipeline.

Now, clearly, Gov. McAuliffe is not a kooky climate science denier or anything awful like that. Nor is he in any way hostile to clean energy, from what I have seen. The problem is that there’s simply no way to reconcile support for things like offshore drilling and continued reliance on coal with taking effective measures to head of man-made global warming disaster. And, frankly, even if there were no such thing as global warming, it should be utterly unacceptable to blow up mountains and destroy entire ecosystems (while making the people who live there both sicker and poorer) for coal. Just as it should be utterly unacceptable to risk devastating oil spills off Virginia’s beautiful, and economically crucial, coast (and Cheseapeake Bay).

Finally, of course, the fact is that clean energy is rapidly becoming a better deal, purely on economic/cost grounds (e.g., see Three Graphics from Lazard Study Show How Competitive Clean Energy’s Gotten, than fossil fuels, not even taking into account the massive, taxpayer-funded corporate welfare the fossil fuel companies receive, nor the failure to “price in” the enormous environmental and health-related “externalities” that fossil fuels entail. We know that energy efficiency is by far the cheapest form of energy – “negawatts,” the energy you never have to produce. We also know that onshore wind is cheaper than coal and natural gas (in terms of its “Unsubsidized Levelized Cost of Energy”) right now, with the cost of both solar and wind falling fast. In sum, given the economics alone, it makes essentially no sense whatsoever to invest any further in 19th and 20th century fossil fuel technologies. When you factor in the environmental and health “externalities” of fossil fuels, it makes even less than “no sense.”

Unless, of course, you are a fossil fuel company or fossil-fuel-heavy utility that wants to hold on to their profitable entrenched, “incumbent” status as long as possible. But just because they want to milk a few more years of profit out of despoiling the environment doesn’t mean we have to enable their greed-above-all, screw-the-planet behavior. And there’s certainly no reason why Virginia’s governor shouldn’t send them that message, loud and clear — while moving up the rankings from “orange” to “green” in the process.