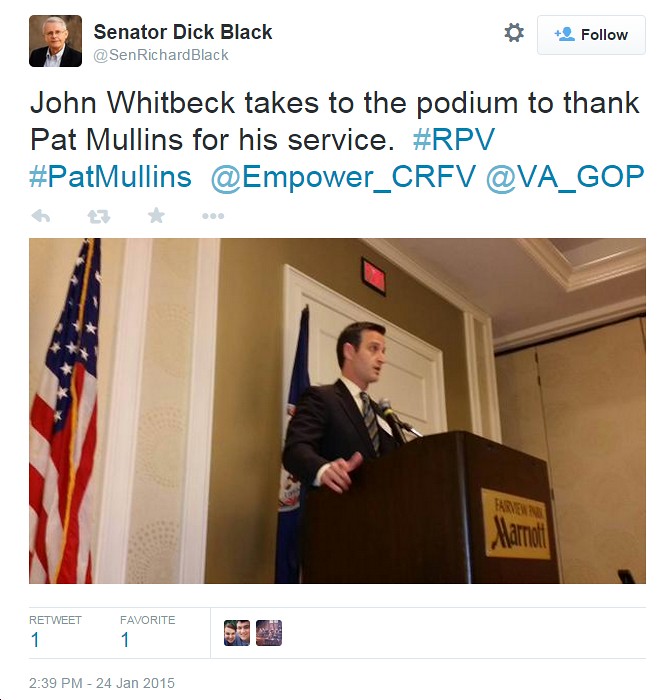 Ah, the Republican Party of Virginia (RPV), that force for moderation and sanity, gotta love it. Today, they’ve having their farewell lunch for RPV Chair Pat Mullins, to be replaced by John Whitbeck, at an event cohosted by Sen. Dick Black and at which speakers included Ollie North. Just a few quick points about what this says about Virginia Republicans.

1. They clearly have no problem with the far-far-far-right-wing nutjob (State Sen. Dick Black) who sent plastic fetuses to members of the General Assembly, and who likes to muse about “spousal rape,” “nighties, supposed gay rapes in the showers, and how contraceptives are just “baby pesticides.

2. They also clearly have no problem with the convicted felon (Ollie North) and extremist who almost singlehandedly brought down the presidency of their greatest hero, Ronald Reagan. Also note that Nancy Reagan ripped North, “asserting that the former aide to President Ronald Reagan ‘lied to my husband and lied about my husband'” and that he “has a great deal of trouble separating fact from fantasy.”

3. Finally, as for the incoming RPV Chair John Whitbeck, here are a few articles you might want to check out about him: Virginia Candidate John Whitbeck Has Anti-Semitic ‘Macaca’ Moment; Mark Herring: Statements Made at Cuccinelli Rally “a disgrace to Loudoun County & the Commonwealth”, and Anti-Semitic “Joke” Candidate’s HOA Was Sued for Anti-Arab/Muslim Discrimination.

Any further questions about the Republican Party of Virginia?

P.S. Also note that none of these folks has condemned State Senator Steve Martin for his recent comments about how Muslim Americans shouldn’t be protected by the U.S. constitution (Martin continued his tirade against Muslims: “They celebrate death. We celebrate life. They celebrate denial of liberty. We celebrate liberty restrained by virtue.”)

Del. Don Scott (D): “This is simple. Folks need to come clean and admit this amendment is terrible and they f***ked up by voting...