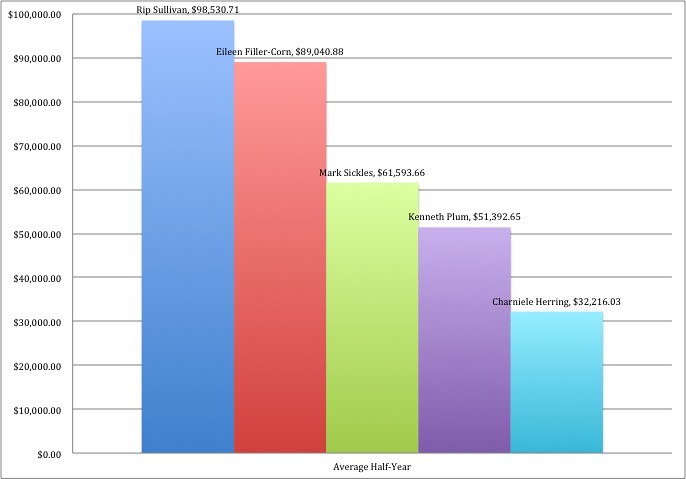 With current House Democratic Caucus Chair Scott Surovell running for the State Senate seat of retiring Sen. Toddy Puller, House Democrats will have to pick a new chair. While a date for the election hasn’t been officially set, I’m hearing that the contest will likely occur before session ends at the end of this month and members return home to their districts. In fact, it’s possible that the next Caucus Chair could be chosen as early as next week.

While Democrats scored a big win by flipping the 34th District in January’s special election (Democrat Kathleen Murphy won that race to succeed Republican Barbara Comstock, who was elected to Congress), it’s going to be a long, tough, expensive battle to take back the House of Delegates, where Democrats currently have just 32 seats out of 100.

Given that the House Democrats’ Caucus Chair is in a unique position to leverage and shore up the resources of all of the caucus’s members to build back to 51 seats, a great deal will depend upon whether (or not) the next chair has the drive, time and talent for this heavy lift. The position of Caucus Chair shouldn’t be sought as a feather in anyone’s cap, but rather as a major responsibility that needs to be taken very seriously.

What Democrats had with Scott Surovell, and will require in his replacement, is a strong progressive who: 1) can articulate the party’s core message; 2) possesses the political savvy to help recruit strong candidates and help put them in a position to win back seats in the House of Delegates; and 3) raise the large amount of money needed to fund races across the Commonwealth. Based on my conversations with political observers and House of Delegates members, below is an alphabetical list of the top 5 most likely successors to Scott Surovell, with some analysis of each candidate.

Personally, I like and respect Eileen Filler-Corn a lot, and I’d guess she starts out as the front runner, having run for Caucus Chair last year against current Chair Scott Surovell. While my sources in the House tell me she didn’t do particularly well in that race, she will still start off with some residual support. Of the candidates on this list, she comes in second in average fundraising numbers (see graph), demontrating that she has the ability to raise serious money. Having said that, much of the money raised was not necessarily because she was such a strong fundraiser, but because she was in a less-than-safe district. Her average is particularly high due to her 2010 race, when she spent nearly $400k and won by 37 votes. Her district has since been redistricted to make it slightly bluer, but of the five people listed, it’s still the least safe (56% in a gubernatorial year). For that reason, Filler-Corn could have to spend upwards of $150k to defend herself this year — money that she wouldn’t be able to spend helping elect OTHER Democrats. Finally, it’s worth mentioning that Filler-Corn’s husband, Bob Corn, runs a political consulting firm used by several members of the House. Could that set up an awkward situation for Democratic House members if Filler-Corn is elected caucus chair? I definitely wouldn’t want to overstate this issue, but it seems like something for Democrats to discuss internally regarding how they would handle this.

Herring would be best-suited to talk about women’s issues as the former chair of the reproductive health caucus, which would be a good thing.  My long-articulated issues with Herring have to do with a performance as DPVA chair which many Democratic insiders have told me was weak; and her run for Congress, which was one of the weakest campaigns I can remember in all of my time in Virginia politics. That includes some truly cringe-inducing performances at debates (although she improved somewhat as the debates wore on). In contrast, I’d argue that the caucus needs a dynamic public speaker skilled at debate. Meanwhile, Herring only won her first election in deep-blue Alexandria by just 16 votes. Ee gads. And I’ve even heard rumors she’s going to get a primary this year after her less-than-impressive 8th CD campaign, much like mayor Bill Euille is apparently going to be primaried. Is this really the person we want leading the charge to win back seats in the House of Delegates?

Plum would be a safe choice, as he is a reliable progressive and from a safe district. He has also previously served as Caucus Chair, so there wouldn’t be a learning curve. Likely his tenure would only be to get Democrats through the 2015 election.

Sickles, a strong progressive on “social issues” but relatively conservative on economic issues, was Caucus Chair before Surovell. That includes the gubernatorial election year of 2013, when Democrats swept the three statewide offices but failed to net any gains in the House of Delegates. It’s hard to see Sickles running after stepping down last year, but it’s theoretically possible he couuld be called upon to serve again if the rank-and-file aren’t comfortable with any of the alternatives. Sickles can certainly raise money and, by all accounts, worked well with Democratic Leader David Toscano. However, sources say that Sickles’ private sector work has picked up and he might not have the time for the massive responsibility this position holds, given the task at hand (fighting back from 32 to 51 seats). The last question with Sickles is that he (and Filler-Corn) both recently received strong committee assignments. Given that Speaker Howell traditionally assigns the caucus chair to low-level committees, the question for Sickles (and Filler-Corn) is: do they really want to give up their strong committee assignments?

Sullivan is the real dark horse here. I’ve had people mention his name to me and argue that he would be the obvious choice for Caucus Chair if he weren’t a freshman. After winning a special election last year in a tough political environment (and with just one week to mount a campaign), Sullivan understands what it’s like to run a winning campaign. Another advantage for Sullivan is that he will never have to worry about facing a competitive race in the deep, deep-blue 48th House district. In terms of raising money, Sullivan ranks first on the list of contenders for Caucus Chair. This is particularly remarkable given that it’s based on average half-year fundraising, and during the first half of 2014, Sullivan raised just $5,000 (his campaign for House of Delegates literally kicked off the day before the start of the second half of the year), which basically cut his half-year average in half. Sullivan also previously started a PAC with Aneesh Chopra, Scott Surovell, and others, and has a large donor network coming from the law firm of Reed Smith, where he was a partner for 27 years. With David Toscano coming from donor-heavy Charlottesville and potentially Sullivan from McLean/Arlington, the two could be a dynamic fundraising duo. Sullivan was also chief legal counsel to the Obama re-election campaign in Virginia, which demonstrates how vast his connections really are. That experience could also prove useful ahead of the legal cases surrounding the redistricting boundaries in the House of Delegates. In terms of a floor leader, I wrote about Sullivan’s impressive first speech here, but that in a way is also the problem/challenge — the speech was just his first on the floor of the House. The big question is whether his fellow Democrats are confident enough in him based on what they’ve seen so far to elect him Caucus Chair.

If I had a vote, it would be between Filler-Corn and Sullivan. I think Eileen would do a good job and keep incumbents safe, but the real question is whether Rip represents the type of energy/money/political savvy “jolt” that House Democrats need to start clawing their way up from their current misery (32 seats out of 100 – ugh!). Interestingly, Sullivan and Filler-Corn both gave Kathleen Murphy the most amount of money, $3,000, of someone not in leadership. I think it’s particularly impressive for Sullivan, who has immediately jumped in and become a top donor to fellow Democratic candidates.

I’ve heard rumors that Alfonso Lopez and Marcus Simon could be interested in running, but my sources tell me they aren’t making any moves.  I’ve also heard Rob Krupicka’s name mentioned, but it’s hard to imagine he’d have the time with the opening of his new donut shop (speaking of which, I really need to check that place out – lol!).

I added up the fundraising numbers and averaged them on a six-month basis since 2009, or since that member has been in office. These numbers reflect those averages. Note that Rip Sullivan only raised $5k in the first half of 2014, but that’s because his campaign began on June 30. Sullivan reported raising over $190k in the second half of 2014, but the $5k from the first period significantly weighs down his average.