To introduce this photo montage of extremist insanity, let me just remind you of who Virginia State Senator Dick Black is and what he’s said/done over the years. A few “highlights” include: What Is It With Loudoun Republicans?!? Dick Black on Spousal Rape, “Nighties,” etc., The Truth About Dick Black (e.g., called birth control pills “baby pesticides,” passed out “pink plastic fetus dolls to state lawmakers in 2003 in a creepy campaign to win votes for various anti-abortion measures,” called “An Embarrassment to us all” by John Feegel, a former Chief of Staff to the Republican Leader in the Virginia House of Delegates); Republican Loudoun-sanity Continues: Dick Black Rails Against Gays in the Military (“there was a young fellow who went to the showers at night, there were two homosexuals lurking — they were also basic trainees – and they strangled him with a towel and forced him to submit to, you know, things that we won’t talk about”); Sen. Dick Black (R-Homophobia): Polygamy “just more natural” than homosexuality; VA Sen. Dick Black (R) Praises “Extraordinary Gallantry” of Syrian Armed Forces, GOP Candidate Who Made Marital Rape Remarks Drops Out of Congressional Rac, etc, etc. So who in their right mind would have this extremist maniac speak at their campaign events or pose for photos with him?  In the montage below, clockwise from the top left, you’ve got bat****-crazy Sen. Ted Cruz, “stupid party” epitome Louisiana Gov. Bobby Jindal, Gainesville District (Prince William County) Supervisor Pete Candland, and last but not least supposed “moderate” (guess not!) Manassas City Mayor Hal Parrish. Yep, those are Dick Black’s BFFs, and I think it goes without saying that none of them should ever be elected to anything, let alone higher office, going forward. 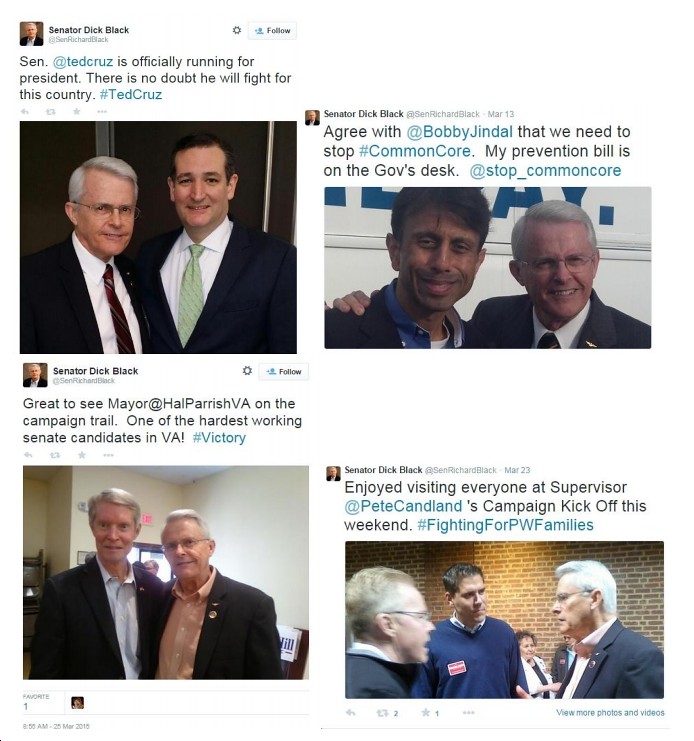