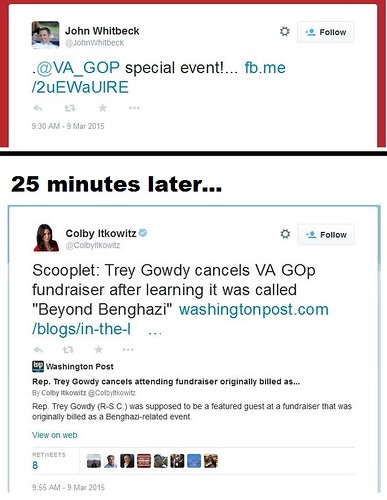 Yesterday morning, Republican Party of Virginia Chair John Whitbeck tweeted an invitation (now deleted, but pictured here) to the March 19th “Beyond Benghazi” fundraiser with Rep. Trey Gowdy (R-SC). Less than 30 minutes later, it was reported that Gowdy had pulled out of the event. By the afternoon, the RPV issued a statement that they had cancelled the event.

Not only is this a huge embarrassment to Republican Party of Virginia, it’s possible that they’re forced to pay thousands of dollars to the venue for cancelling the event on such short notice.

With the event page still up on the Republican Party of Virginia’s website, I checked to see just what they had gotten themselves into with the cancellation.  Turns out that the Ballroom they were to use at the Richmond Convention Center holds up to 500 people. Since the event was less than a month away, according to food & beverage provider Aramark’s cancellation policy, RPV still has to pay 50% of the catering costs, and lose the non-refundable prepaid amounts plus the 25% deposit, which would be based on food, labor, 19% service charges, table setups and 11% taxes. Let’s not forget any costs for renting the room itself plus the VIP reception room, and who knows how much they’re in the hole for. I wouldn’t be surprised if it was in the tens of thousands of dollars.  For a party that’s already in debt and beset with internal strife, it’s no wonder they’re trying their best to squash any news of the magnitude of this incredible blunder, both on a PR and a financial scale.

Are there any RPV staffers still around that they can fire for this?  If I were a member or donor, I’d be calling for Whitbeck’s head.  Imagine if you’d paid $5000 to be an event sponsor and now you’ll have to get your money refunded. Would you ever donate to these crackpots again?