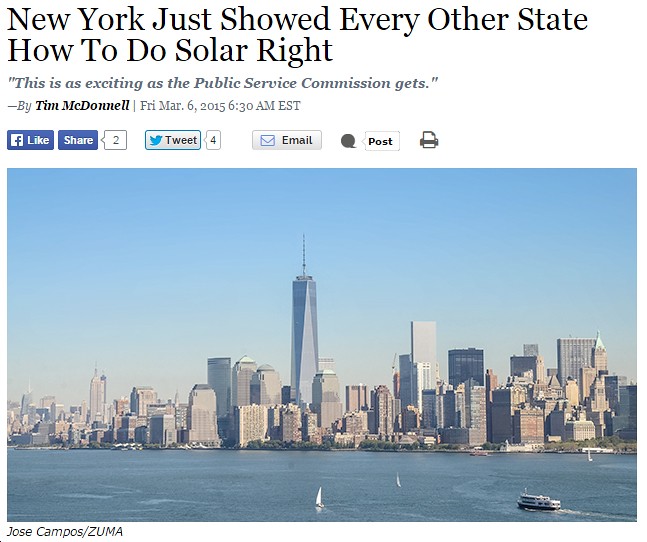 Over the past few days, I’ve run across several articles which really should be must-read for anyone involved in formulating and/or implementing energy policy in Virginia. That includes, of course, Dominion Power, which basically gets whatever it has bought and paid for. It also includes the similarly bought-and-paid for (by fossil fuel interests) State Corporation Commission (SCC), Virginia General Assembly and Gov. McAuliffe (who in recent months has been wildly wrong on at least two important energy/environmental issues facing Virginia).

First, I strongly recommend that all of the above read New York Just Showed Every Other State How to Do Solar Right. The gist of this article is that New York is getting serious about promoting clean energy and changing the existing, dysfunctional model for utilities in the Empire State. Check out the following excerpts, and keep in mind that there’s absolutely no good reason why any of this couldn’t, or shouldn’t, be done in Virginia.

Under a new order from [New York’s] Public Service Commission, utility companies will soon be barred from owning “distributed” power systems-that means rooftop solar, small wind turbines, and basically anything else that isn’t a big power plant…The move is part of a larger package of energy reforms in the state, aimed at setting up the kind of futuristic power system that experts think will be needed to combat global warming. The first step came in 2007, when the state adopted “decoupling,” a market design in which a utility’s revenue is based not on how much power it sells, but on how many customers it serves…Now, under New York’s most recent reform, a utility’s revenue will instead be based on how efficiently and effectively it distributes power, so-called “performance-based rates.” This, finally, provides the incentive utilities need to make decisions that jibe with the state’s climate goals, because it will be to their advantage to make use of distributed energy systems…So far, the response from utilities has been receptive…The change in New York could become a model for other states…”Everyone is watching to see what’s happening here…It’s really a model of what a utility could be in the future.”

Just think about why Virginia hasn’t adopted serious “decoupling,” “net metering,” Renewable Portfolio Standards, and other crucial policy measures. The short answer is simple: large amounts of money utterly corrupting our politiical system, “capturing” the very legislative and regulatory bodies that are supposed to be in charge, but which de facto have ceded that authority to powerful corporate interests such as Dominion Power. This SHOULD Be an utterly unacceptable situation to every single Virginian, with people literally protesting in the streets to change it. Of course, the folks at Dominion, etc. are counting on Virginians NOT doing just that, and so far their bet’s been paying off — for them, not for us. 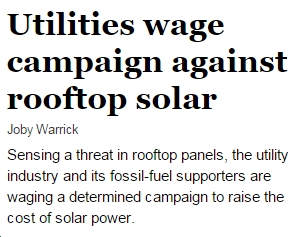 Second, all of the aforementioned should read Clean power is right for Virginia, by former FERC Chair Jon Wellinghoff. The argument here is simple, fact-based, and powerful. In short, it is that: 1) criticism by fossil fuel interests and their lackeys (e.g., the State Corporation Commission) of the EPA’s proposed Clean Power Plan gets it exactly backwards (in fact, “Virginians’ utility bills will go up if the state chooses not to cut pollution through renewable energy and energy efficiency“); 2) counting on natural gas is a big mistake, because although it’s cheap now, its price is going to go up, big time; 3) far from being treated unfairly by the EPA, as Gov. Mculiffe and others have been pathetically whining about of late, Wellinghoff explains that “Virginia is 70 percent to 80 percent of the way to meeting its plan goals with coal plant retirements and fuel conversions that were planned before the CPP“; and 4) by a combination of energy efficiency and increasingly inexpensive solar and wind power, Virginia ratepayers can enjoy “a once-in-a-generation opportunity to make the economy more efficient, create jobs and cut people’s energy bills.” Is that a no-brainer or what? Again, it is for 99.9% of Virginians who are not bought-and-paid-for politicians, or owners/major shareholders in fossil fuel companies and/or Dominion Power.

Finally, everyone should read the front-page Washington Post story, Utilities wage campaign against rooftop solar to understand the powerful, reactionary forces we’re up against. In short, “Sensing a threat in rooftop panels, the utility industry and its fossil-fuel supporters are waging a determined campaign to raise the cost of solar power.” Fortunately, they’re mostly losing that campaign in the political arena, as people across the political spectrum (e.g, the “Green Tea” movement) who support solar power have fought back successfully. So, the utilities have turned to more friendly territory — the “captured” regulatory agencies (“more recently, the battle has shifted to public utility commissions, where industry backers have mounted a more successful push for fee hikes that could put solar panels out of reach for many potential customers“). In the end, of course, this is a losing battle for utilities, as solar prices are plummeting (with no end in sight), as are power storage technologies (“The cost of energy storage is expected to drop to US$100 per kWh in the next five years, against US$250 now”).

The result if utilities don’t adapt to these revolutionary changes? As I wrote in January, quoting David Roberts’ superb piece Rooftop solar is just the beginning; utilities must innovate or go extinct, the “death spiral” awaits. And, paradoxically, the more they fight it, the faster and harder it could come, to the point that failure to adapt and evolve could lead to sudden extinction for Domiminion and other “dinosaurs” out there. The choices are theirs, but sad to say, at least so far, there’s little sign that they’re going to make the right ones.