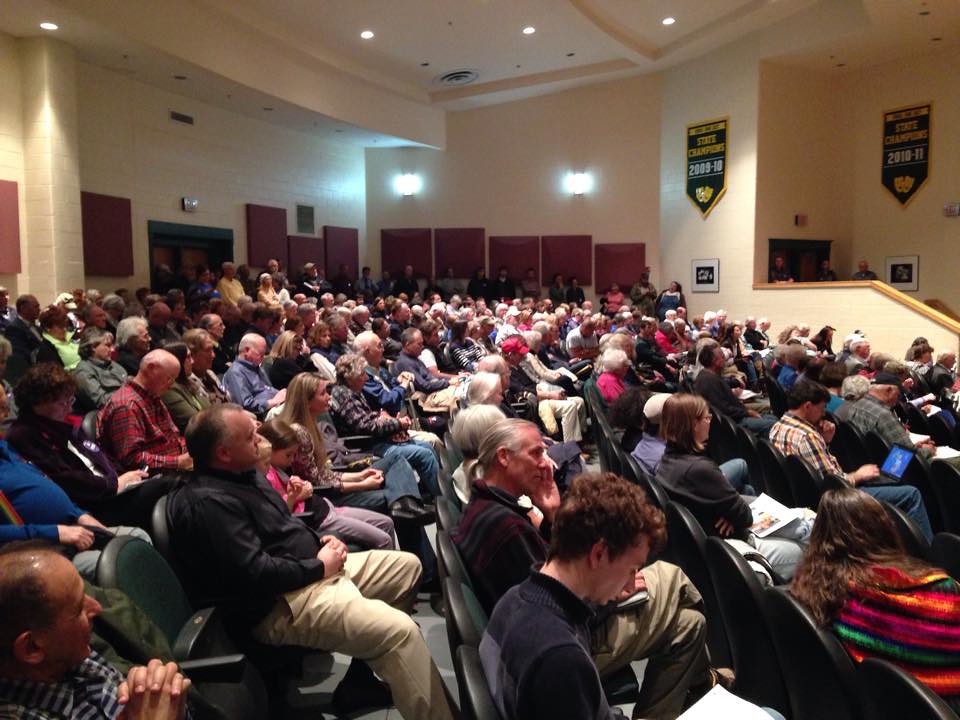 The Federal Energy Regulatory Commission (FERC) Environmental Impact Study scoping meeting was held Wednesday night in Nelson before a standing-room-only crowd in the 600-seat auditorium at Nelson County High School. FERC had “invited” several state police officers to maintain order. We welcomed them and told them we promised to behave.

After being told we could not have signs at the venue or in the meeting, we arrived to see numerous Dominion Power “Clean Energy” signs. In an effort to appear to have community support, there were two hand-painted signs, in favor of the pipeline, planted on school property. Problem is, Dominion representatives were seen putting those hand-painted signs up! Of course, Nelsonians were quick to add their “No Pipeline” signs.

Having arrived at 6:15 pm to sign up to speak for a 7 pm start time, Free Nelson was surprised to be designated as speaker number 43, and dumbfounded when FERC representatives told us they had to be out of the building by 10 pm. They handed us a form suggesting we submit our comments in writing.  We questioned why they would end the meeting at 10 pm when there would be hundreds, we believed, who would want to speak, and would be unhappy if not allowed to do so. They answered by shrugging their shoulders and asking us to move along.

Dominion and FERC tried quite ineptly to stack the deck with speakers. This attempt infuriated those with legitimate concerns about the proposed Atlantic Coast Pipeline (ACP). The first 12 folks to speak were pro-pipeline and many, we believe, were Dominion Power plants. We had a pipefitter from Columbia Gas, a retired Exxon executive, another oil distributor, etc. Also, several of the early speakers lived in Richmond, Albemarle or somewhere other than Nelson.

Saying nothing about the Environmental Impact Study, but using every second of their three minutes, these folks spewed Dominion talking points about jobs and tax revenue, and supporting property rights except if it meant we could have energy independence.  All, of course, are points which have been thoroughly debunked.

In the end, FERC allowed speakers until 10:45 and citizens spoke about legitimate concerns regarding water quality, geology, topography, safety, documented ancient flora, forest fragmentation, invasive species, and cultural and historical sites. However, only 78 of the 203 people who signed up were allowed to speak.  When FERC representative Kevin Bowman was asked about those who didn’t get to speak, he muttered something about it not being his problem!

FERC has been shown to be nothing more than a rubber stamp for the oil and gas industry. Chair Cheryl LaFluer was quoted recently stating, “These groups are active in every FERC docket… As well as in my email inbox seven days a week, in my Twitter feed, at our open meetings demanding to be heard…We’ve got a situation here.”

We’d like to share a secret with Chair LaFluer: as a governmental entity, the citizens of Nelson County expect FERC to represent their best interests, their health, safety, and welfare. As one of “these groups,” we will continue to send FERC emails, attend meetings and speak the truth. If that creates an untenable situation for FERC, they should probably rethink their position, treat people with respect, and do their jobs to objectively review projects before them.