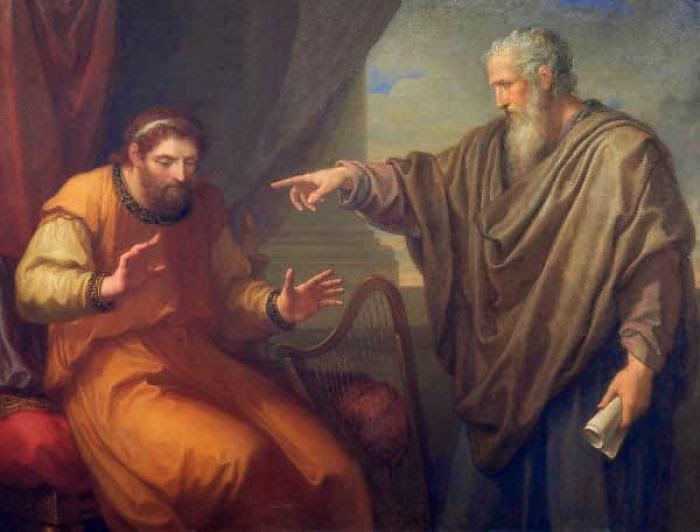 This piece has been appearing this week in the newspapers of my very conservative congressional district (VA-06). It embodies the strategy I think we in Liberal America should be pursuing: See the evil. Call it out. Press the Battle.

A story from the Bible comes to mind: King David has taken for himself Bathsheba, wife of Uriah the Hittite. The prophet Nathan comes to him and tells a story of similar wrong-doing. Not recognizing himself in the story, King David becomes righteously outraged.  At this point, Nathan springs the trap and declares: “Thou art the man!”

David accepts his own behavior, because it serves his own interests. When he sees it from the outside, he is so indignant that he says the sinner should die.

In the spirit of that biblical story, I would like to ask the conservatives reading this column what you would have thought, not long ago, if you had heard about political conduct like this:

1) An American president is elected after promising to solve a long-standing problem that costs thousands of American lives and a trillion dollars every year. His proposal is so moderate that its roots are actually in the other party. But that party does everything it can to prevent passage. Then it tries to overturn the law. When that fails, it tries sabotage.

All this – including voting more than 50 times to repeal a law, knowing it won’t be repealed – is a spectacle unprecedented in American history.

2) This is part of a pattern in which this opposition party has made it a priority to prevent that president from accomplishing anything. It opposes even ideas that were once its own, even measures that are clearly supported by an overwhelming majority of the people.

Although the president proposes nothing outside the American mainstream – he is more moderate than a great many in his own party’s base – the opposition paints him as an extremist.

No party in American history has ever before made the president’s failure its top priority.

3) This opposition party refuses – until that power is taken from them – even to allow many of the president’s nominees to get a vote. This obstruction is not about the quality of the nominees – many are the kind of distinguished and moderate people who used to be confirmed virtually unanimously – but is simply motivated by a desire to prevent the president from exercising the powers of his office.

The obstruction of these nominations goes beyond anything seen before in America.

4) The president, in one of the most important foreign policy efforts of his administration, is attempting to negotiate a diplomatic solution to a dangerous problem that cannot be solved militarily in any acceptable way. The opposition party, in a move unprecedented in American history, invites a foreign leader to address Congress in order to undermine the president’s policy. And then – again in an unprecedented action – it seeks further to block the negotiation process by writing a letter to the adversary with whom the president is attempting to reach an agreement.

5) Throughout all this, the opposition party shows the president a level of disrespect – one might even say, contempt – that had never occurred in more than two centuries of American history. Even in times of rancor between the parties, their leaders showed respect for the office. But, in this story, there is no such restraint.

In the America I grew up in, I doubt that a single conservative of my acquaintance would have supported such behavior. Indeed, part of being a conservative is to be suspicious of what is unprecedented. Our traditions and norms are there for a reason, a real conservative understands, and a conservative honors and protects them. He doesn’t sweep them away because it suits his momentary interests.

But it is said now that all this is playing well with this party’s supposedly “conservative” base, and all evidence supports that claim.

I don’t know which is more troubling:  to have a political party that has gone rogue, that respects neither the will of the people (who have chosen twice to invest the powers of the presidency in a particular person) nor the norms of American politics; or to have the base of a supposedly conservative party rewarding conduct from its leaders that would formerly have been regarded as disgraceful and destructive of our democracy and its traditions.

So I ask you conservatives: If you had heard such a story a decade ago, or a generation ago, what would you have said about such an opposition party?

If you’d have condemned it then but support it now, I say, “Thou art the man!”