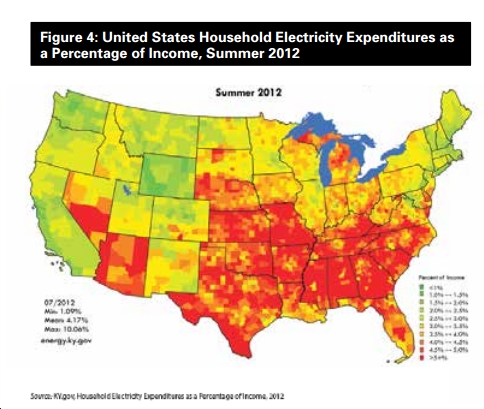 for Today and Tomorrow,” which adds two more powerful arguments for clean energy to the list: economic fairness and social justice. As the report explains:

…we must consider the disproportionate health impacts of dirty, coal fired power generation on low-income communities and people of color. According to the National Association for the Advancement of Colored People (NAACP), people of color and low-income families are more likely to live in close proximity to the coal plants that generate most of our electricity. People of color make up 36 percent of the U.S. population, but 39 percent of those who live within three miles of a coal-fired power plant. Coal plants that are located in urban areas are overwhelmingly sited in communities of color. While 56 percent of white Americans live within 30 miles of a power plant, 68 percent of African Americans do. African Americans frequent the emergency room for asthma attacks three times as often as white Americans do. 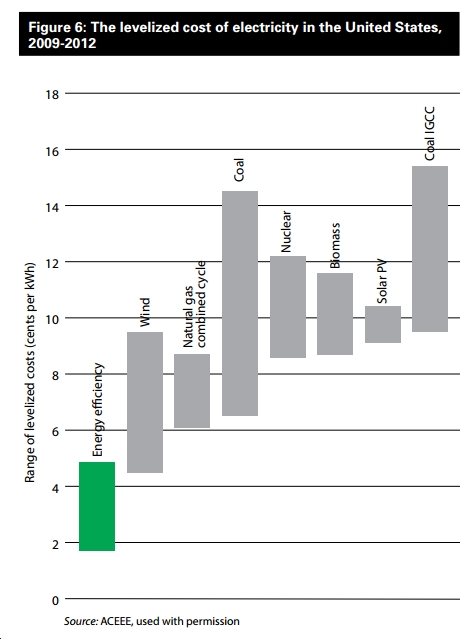 *Energy efficiency “allows people to lower their energy use (and therefore their energy bills) without sacrificing services like light and heat…making bills lower for all customers, even those who did not install efficiency measures in their own buildings.” Keep in  mind that energy costs “make up a significant portion of the annual incomes of hundreds of thousands of Americans,” so again, lower-income Virginians will benefit disproportionately from a switch from dirty to clean energy.

*More good news on the energy efficiency front and low-income households: “Energy inefficient housing can be expensive, even if the nominal mortgage payment or rent is low, and energy efficiency can make a big difference in achieving and keeping the dream of home ownership. A study from the University of North Carolina at Chapel Hill and the Institute of Market Transformation found that mortgages secured by families in houses meeting Energy Star efficiency standards experienced substantially lower rates of delinquency and default, with 32 percent fewer defaults compared with non-Energy Star homes.”

*How about multifamily housing, which “accounts for 26.1 percent of all housing units in the United States, providing homes to more than 17 million households nationwide-including nearly one half of all very low-income renters?” The NRDC study finds that energy efficiency improvements in those building “could save building owners and residents up to $3.4 billion every year.”

*Finally, with regard to renewable energy, this report highlights what we’ve talked about repeatedly: namely, that “Renewable Energy Is Cost-effective and Increasingly Available.” As I’ve pointed out a gazillion times, “energy efficiency is the lowest-cost resource” — far cheaper than coal, nuclear or natural gas, and that’s not even taking into account the enormous subsidies (both direct and indirect) and negative “externalities” (environmental, health, etc.) of non-renewable energy sources.  The next least expensive form of energy, by the way, is not a fossil fuel, but onshore wind, which is very similar to advanced, highly efficient “combined-cycle” natural gas-fired power plants.

*As for solar PV, it’s already in the cost range of coal-fired and nuclear power plants, with one huge advantage: solar power costs have been plummeting, and are expected to continue falling, while solar efficiency rates continue to increase as the technology improves. In stark contrast, as the new NRDC report points out, “A major risk in being overly dependent on fossil fuels is price volatility.”

Bottom line: there are already a wide range of strong reasons to transition rapidly off of dirty fossil fuels and onto clean energy, including the social justice and economic fairness benefits to low-income Virginians — not just in the inner cities, but in other poor areas of the state, including (ironically) the coalfields of far southwestern Virginia. What on earth are we waiting for, and why is our governor wasting all of our time with the natural gas “bridge to nowhere?”