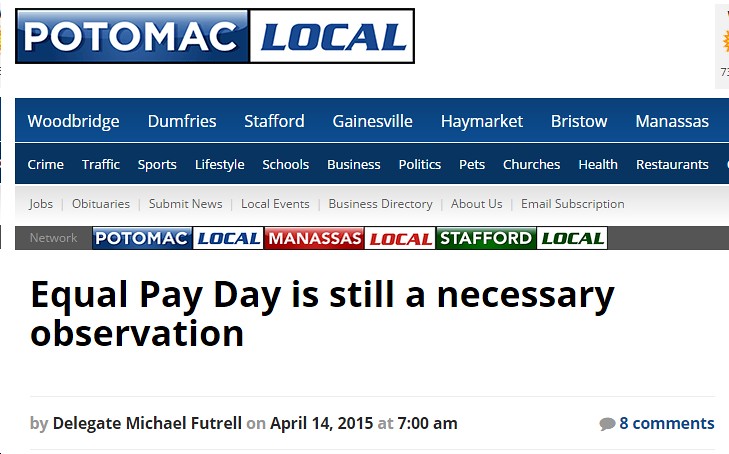 The following blog post falls into the “some people never learn” category. To wit: in 2013, the Michael Futrell for Delegate campaign website was caught copying, word for word and without any attribution, large swaths of Virginia House Minority Leader David Toscano’s website. Two years later, the pattern continues, as Potomac Local calls out his campaign for…you guessed it, copying word-for-word without attribution yet again.

Potomac Local was made aware that pieces of this submitted opinion were not correctly attributed to other sources.

In order to clarify these errors, we have spoken with Futrell and his team about the content, and have verified the sources.

The first line that needs attribution is, “The women’s equality movement has come a long way since the hard fought struggle to pass the 19th amendment back in 1919, but we still have a long way to go.”

Communications Director Symone Sanders stated, “[That] paragraph just has to be a coincidence. I have three different drafts of this op-ed, and I wrote that my own self.”

The second line that needs attribution is, “In 1996, The National Committee on Pay Equity (NCPE) established Equal Pay Day to increase public awareness on the pay gap between men and women. 19 years later, women on average still earn less than men and Equal Pay Day is still a necessary observation.”

Sanders stated that she took that definition from the website, and that it was a common practice to do so.

“That definition comes from the National Committee on Pay Equity – their website,” said Sanders.

Potomac Local confirmed that these two lines are also written in a Times Gazette article from April 2015.

The third line that needs attribution is, “Women are the primary agents of change in our communities, forging ahead for a better future for our families.”

Potomac Local confirmed that this line originally came from a campaign website for Chuck Hassebrook.

“I worked on the campaign [for] Hassebrook and I authored that myself. I did take that line. And I asked [Delegate] Futrell if he liked that line, and he wanted to use it, and he said ‘yes’ but I authored that blip on Women’s Equality Day,” said Sanders.

I was curious, so I popped over to Futrell’s 2015 campaign website, and guess what? Yep, large swaths of it are copied word for word, without attribution, from another website. For instance, here are a few examples I found in 5 minutes or so of searching.

“Preparing young people to think critically and making sure they are college- and career – ready are crucial for success in today’s economy.”

Copied without attribution from the Commonwealth Institute

“Sustaining our commitment to high-quality public education will give Virginia localities the edge it needs to compete in a global marketplace and ensure that Virginians are among tomorrow’s innovators and entrepreneurs.” – Also copied without attribution from the Commonwealth Institute

“By reorganizing the way state health plans and delivery systems are managed we can save time and money while delivering better value for our tax dollars.” – Copied without attribution from Terry McAuliffe’s website

What’s amazing is that after getting called out for this stuff in 2013, the same thing is happening in 2015. Also worth noting is that this heavily…er, “borrowed” website is listed in the State Board of Elections campaign finance disclosure information for Futrell as having been an “in-kind” donation of $24,394.80.  Besides being incredibly expensive for a basic, no-frills website (probably should have been a few hundred dollars), that’s a huge amount of money to spend for material that’s largely “borrowed” from other websites. Ee gads.