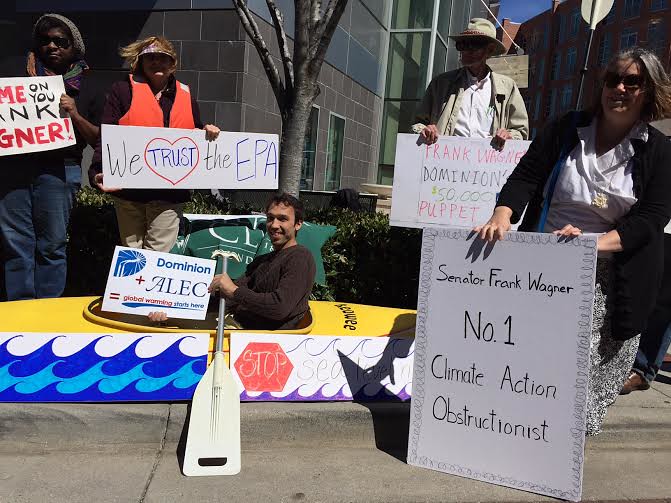 From the Virginia Sierra Club:

Demonstrators with the Sierra Club picketed outside an event for Senator Frank Wagner on Thursday at Town Center in Virginia Beach to protest the Senator’s opposition to EPA rules to regulate carbon pollution from coal and gas fired electricity power plants.

“Senator Wagner is the #1 obstructionist in the Virginia General Assembly to measures to address climate change,” said Glen Besa, Director of the Sierra Club Virginia Chapter. “No one wasted more of the legislature’s time than Senator Wagner attacking the EPA on behalf of polluters like Dominion and coal companies like Alpha Natural Resources.  When you represent an area as vulnerable to sea level rise as Hampton Roads, that’s just irresponsible.”

“We think all this fossil fuel money may be clouding his judgment,”said Besa, ‘and he has forgotten who he represents.”

During the 2015 legislation session, Senator Wagner carried SB 1349, controversial legislation on behalf of Dominion Virginia Power that restricted the oversight authority of the State Corporation Commission to order refunds when the utility overcharges its customers.  When it became public knowledge that Senator Wagner also owned stock in Dominion, he sold his shares during the legislative session.

While working for passage of SB 1349, Senator Wagner repeated claims by Dominion that the EPA’s Clean Power Plan to reduce carbon pollution from coal and gas plants was unfair to Virginia and could result in electricity bill increases of 30% or more.

EPA estimates and an independent analysis by the ICF consulting group found that the EPA’s Clean Power Plan could actually reduce customers bills if investments were made in efficiency.  A recent report by PJM, the organization that operates the regional electrical grid also confirmed that, contrary to Dominion’s and Wagner’s claims, the Clean Power Plan could reduce electricity bills.

“Climate change is real, the seas are rising as a result and the EPA’s Clean Power Plan is a reasonable first step to addressing climate change,” said Zach Jarjoura, an organizer with the Sierra Club.  “We’re here to let the public know that Senator Wagner is siding with the fossil fuel industry over the interests of his constituents.”