The Washington Post, which according to rightwingers is part of the mythical “liberal media,” has hit many lows over the years. For instance, as we’ve discussed her ad nauseum, the Post routinely prints columns from people who deny climate science, who have advocated for torture, you name it pretty much. Possibly even more insidious, the paper’s “reporting” routinely commits one or more of the following grave mistakes: 1) false equivalency; 2) acting as little more than court stenographers; 3) refusal to properly credit, link, and attribute other people’s work; 4) giving far too much attention to topics that aren’t important, while almost completely ignoring topics that are extremely important (e.g., climate change); 5) barely covering local politics at all; etc.

Having said all that, today the Post hit a new low, even by its already abysmal/non-existent standards. I’m talking, of course, about the Post’s top headline all day on its website: 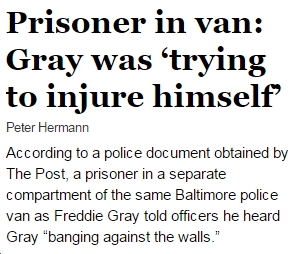 The problems with this story are so legion, it’s hard to know where to start. But let’s go with the video, in which WBAL reporter Jayne Miller completely demolishes the stinking pile of rotting trash.

1. “The medical evidence does not suggest at all that he was able to injure himself. The force of this injury, akin to have the force involved in a car accident, with all that momentum going, that is much more force than you would get trying to bang your head against the wall of the van.”

2. “According to our sources…at that stop, when that prisoner is loaded, Gray is unresponsive, not ABLE to bang his head against the wall of the van.” 3. “If you watch the video of that stop, what you see are several police officers opening the door – the back door of the van and the inside door – and peering in. Now, if you’ve got a prisoner in there that he’s so irate that he’s banging his head against the wall, I don’t think that’s the kind of thing you do…open the door and give him the chance to escape.”

4. “You have to have other injuries. You can’t bang your head against the van, to injure yourself in a fatal way…There is just no information that would corroborate that.”

Right, this all makes perfect sense. Yet the Washington Post, acting as court stenographer, mostly just repeats the laughable story – by an anonymous prisoner, credibility completely unknown – that a handcuffed/shackled Freddie Gray was somehow able to sever his own spine in the police van on the way to the station. As Media Matters explains, although the Post wrote that it’s “not clear whether any additional evidence backs up the prisoner’s version,” there actually IS “available, credible information that contradicts the other prisoner’s account, which the Post could have included before the story was uncritically repeated in other mainstream outlets.”

But they didn’t. Why not? My guess is that it’s a combination of several factors. First, they wanted the “scoop,” and didn’t want to take the time to get the story right. Second, they want “clicks,” “eyeballs,” etc. on their newspaper, at whatever cost. Third, they just don’t care about getting the facts right in their “news” stories (we’ve seen this time and time again, on issue after issue, including Virginia politics). Yet, ironically, this same paper lambasted Brian Williams for making s*** up, and also skewered Rolling Stone (see The LAST People Who Should Be Criticizing Rolling Stone) for the same sins their own paper commits on a daily basis, including today’s “news” story on how Freddie Gray died.

P.S. The comments section at the Post is the predictable cesspool of right-wingnuttery, bigotry, racism…but I repeat myself.