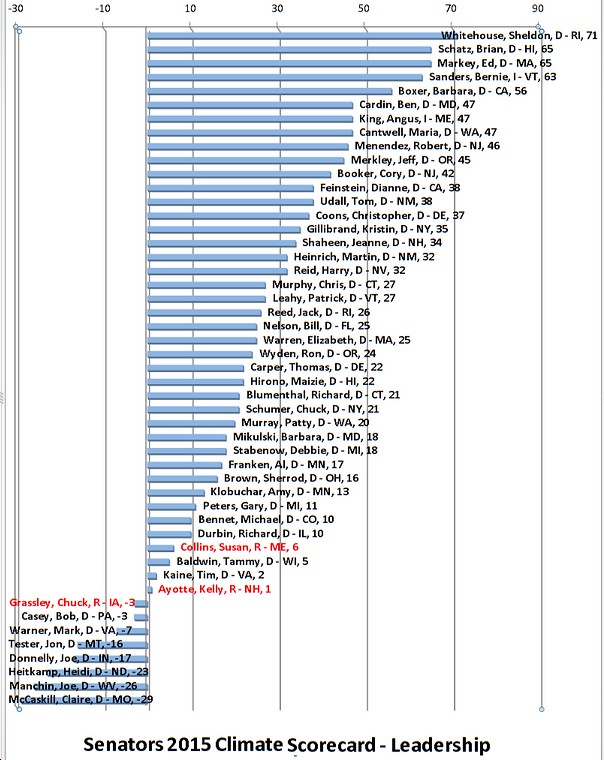 We began by asking: how can one lead in today’s polarized Congress? Climate hawks lead by engaging the public on climate change. They give floor speeches and hold press conferences. They headline community town halls and environmental rallies. They author and cosponsor bills because some good bills make it into budget bills and others will be revived when Dems retake the Senate. They caucus to coordinate their work. Their websites clearly state their position on climate change. They write op-eds for newspapers both national and local. When hurricanes and droughts affect their districts, they publicly connect the climate change dots. They write press releases on noteworthy events such as President Obama’s June 2013 climate speech, EPA Clean Power Plan, and reports from IPCC and NCA. They do all this without detaching from other issues.

To come up with ratings, Climate Hawks Vote “analyzed the public records of all current Senate Democrats (and a few voted out in 2014) beginning in 2011, scoring them on public engagement; bills authored; bills cosponsored; press releases (yes, Sherrod Brown staffers, we did read over 200 pages of press releases), working caucuses joined and led; and websites. We’ve ranked 100-plus introduced bills each session from core to peripheral and awarded more points to authors, less to cosponsors. We’ve weighted public engagement far more than any of our other factors.”

So how did Virginia’s two Democratic U.S. Senators, Tim Kaine and Mark Warner, score on the group’s +100 to -100 scale (where a negative score means the Senator “leads backward” by speaking out for dirty energy projects like Keystone XL, while the more positive the score, the better)?

Tim Kaine: +28 in the 113th Congress (January 3, 2013 to January 3, 2015); +2 in the current, 114th Congress. That’s a pretty good rating in the 113th Congress, although in relative terms, Kaine ranks in the bottom third of Senate Democrats for that Congress. As for the current Congress, Kaine seems to have backslid a bit: although he’s still (barely) in positive territory at +2, he now ranks below Republican Susan Collins of Maine and just above Republian Kelly Ayotte of New Hampshire, while among Democratic Senators he’s eighth from the bottom (just above Bob Casey of Pennsylvania). In contrast, the top-rated climate/clean energy leaders in the current Senate are Sheldon Whitehouse of RI (+71), Brian Schatz of HI (+65) and Ed Markey of MA (+65). The worst-rated Democrats in the current Senate are Claire McCaskill of MO (-29), Joe Manchin of WV (-26), Heidi Heitkamp of ND (-23), Joe Donnelly of IN (-17), Jon Tester of MT (-16), and…

Mark Warner: Yes, our own Senator Mark Warner clocks in at a lame minus 7, sixth worst among Senate Democrats in the current Congress. Maybe this was a fluke, you say? Well, no. In fact, in the previous Congress, Warner was eighth from the bottom, with a minus 1 rating; and in the 112th Congress, he was even worse, fourth from the bottom, with an utterly abysmal minus 20 climate/clean energy rating.

In sum, when it comes to climate and clean energy leadership (or lack thereof), Mark Warner is simply not leading at all on this absolutely criticial, existential issue, while Tim Kaine is doing ok but needs to crank it up a few notches. Why do I say this? Two reasons: 1) as Climate Hawks Votes correctly puts it, “climate change is the greatest challenge facing the next few generations of humanity, not just another Democratic issue;” and 2) a clean energy transition would be a huge plus economically and environmentally for Virginia, a state in which fossil fuel extraction accounts for a miniscule percent of employment and economic output, while potential for energy efficiency, offshore wind and rooftop solar (distributed energy) is enormous. This is, to be blunt, an utter “no brainer;” now we just need our leaders to actually lead.

P.S. One rating that jumps out at me that should be a LOT lower is climate science denier Chuck Grassley.

Here's the list of Biden-endorsed Democratic House of Delegates candidates, including in several competitive districts... https://bluevirginia.us/2021/10/president-biden-endorses-21-virginia-legislative-candidates#comment-5576655810

President Biden Endorses 21 Virginia Legislative Candidates Who Will Fight to Build Back Better in the Commonwealth https://bluevirginia.us/2021/10/president-biden-endorses-21-virginia-legislative-candidates

President Biden Endorses 21 Virginia Legislative Candidates Who Will Fight to...