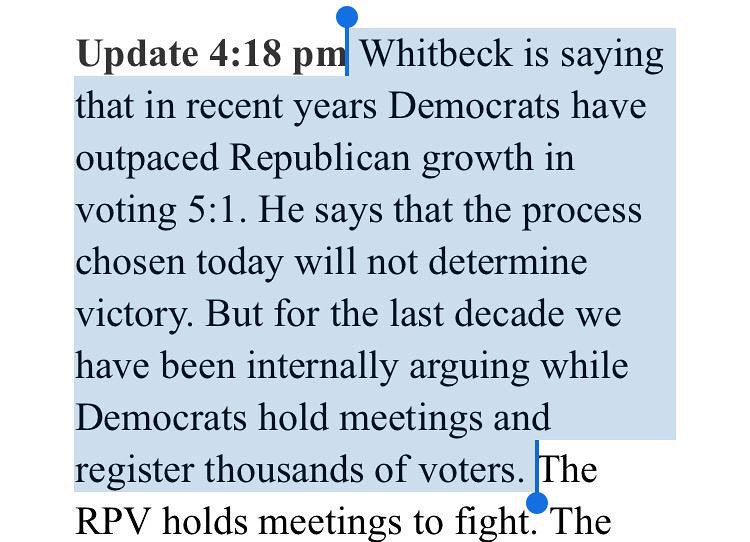 Quite a contrast between the two Virginia political parties today, with a deeply divided Virginia GOP fighting and fighting…and fighting…and fighting over whether to hold a convention or primary for president in 2016, and also whether to hold a convention or primary in 2017 statewide elections. For more on the RPV meeting, being held in Staunton, see The Bull Elephant liveblog, Lynn Mitchell’s live blog, and/or Bearing Drift’s liveblog (note: yep, that’s right, there are THREE conservative blogs covering today’s RPV meeting live from the event; none covering today’s DPVA meeting from the event itself). Anyway, here are few highlights from the two meetings.

DPVA: I’m told that the Steering and Central committees decided to push off the question of whether current chairs terms should be extened to three years (from the current two years), with an ad-hoc committee of Chairs and Steering members to be formed to study the issue and report back in September. Hopefully, that kills this truly lame idea (I’ve heard from a couple sources that it almost certainly does), but we’ll see. Other than that, I hear that DPVA Chair Susan Swecker talked about changes she’s made, including new hires (e.g., a Communications Director) to staff up/strengthen DPVA, as well as the successful “JJ” dinner.

RPV: As of 5:19 pm, according to The Bull Elephant’s Steve Albertson, “Secret balloting on the ‘Primary and a Promise’ motion has begun.” Many hours were spent today debating the relative merits (or lack thereof) of holding a primary or convention for the Republican presidential nomination in 2016, as well as a primary or convention for statewide elections in 2017. Sounds like the party is deeply divided, with Republican Brian Schoeneman tweeting earlier, “41-39 vote against a roll call vote for primary vs convention. Pandemonium erupts.” Discord and even “pandemonium” among Virginia Republicans? Works for me! 🙂  In the end, it may very well be that a compromise passes, in which the 2016 nominating process is by primary, the 2017 process by convention. To my way of thinking, a Republican convention is more likely to produce an “extreme team,” which is far more likely to lose in the general election than a more sane/moderate ticket, so that’s fine with me. Still, would have been great to see Virginia Republicans screw up their 2016 presidential process as well (although some of them apparently fear – with the usual paranoia seen on the right wing- that Democrats might come out to vote for Donald Trump, or whoever the least electable Republican candidate might be).

P.S. Daily Press reporter Travis Fain has been covering the RPV meeting and has had some entertaining tweets. For instance: “You know that phrase ‘herding cats?’ Pretty sure that’s easy by comparison to this RPV meeting.” Also: “Whitbeck: Before you yell or blog ‘think about… one thing … Is what I’m about to do going to help us win Virginia in 2016?'”  I also like this tweet by ultra-conservative Republican Del. Greg Habeeb: “FWIW, I feel like I’m usually a pretty good decision maker. I’m thinking the decision to attend this SCC meeting wasn’t my best one.”

UPDATE 5:46 pm: Steve Albertson of The Bull Elephant reports, “The motion to bind Virginia’s Republican delegation by primary has carried. Vote was 42 to 39 and 1 abstention.” That’s for the Republican presidential nomination in 2016. For 2017, it looks like another convention, and possibly another “extreme team.” LOL. Also, Markus Schmidt (@MSchmidtRTD) of the RTD tweets, “BREAKING: @VA_GOP will hold a statewide primary on Super Tuesday March 1, 2016 to back a presidential nominee.”