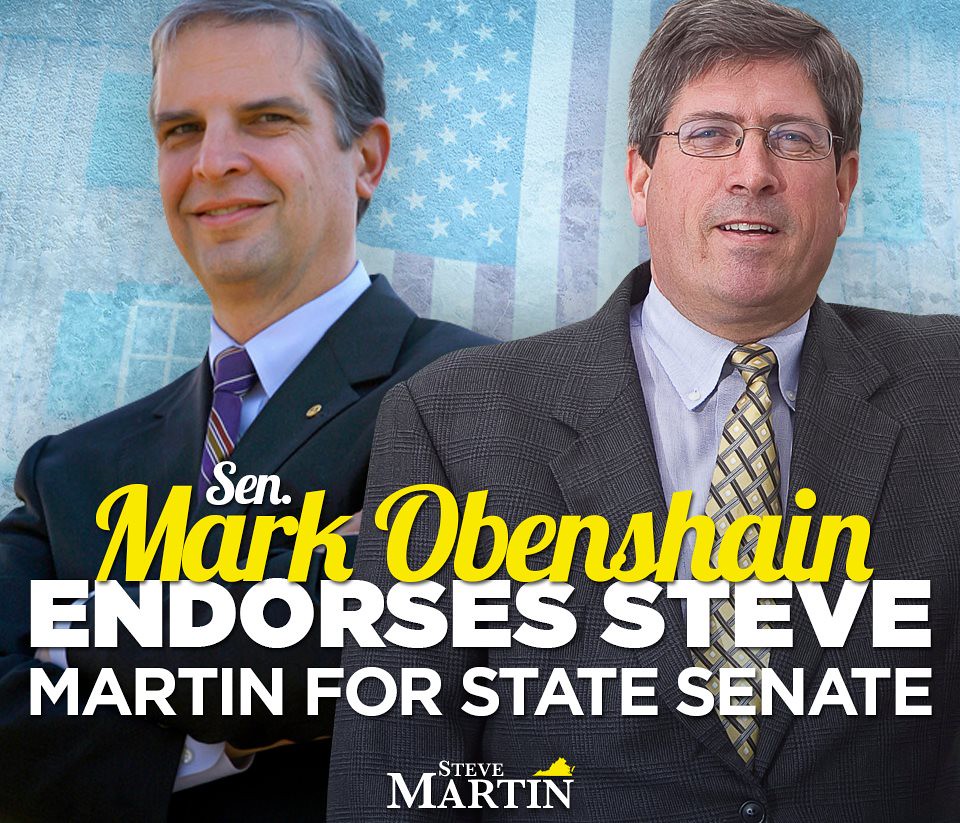 You’ve got to love it when one right-wing extremist nut endorses another right-wing extremist nut. In this case, it’s 2013 Republican Attorney General nominee, Sen. Mark Obenshain endorsing Sen. Steve Martin for reelection. First, why do I call them right-wing extremist nuts? Sen. Obenshain, of course, is infamous for sponsoring legislation that would have required women to register a miscarriage with the police. As if that’s not insane enough, Obenshain also “voted in favor of the 2012 transvaginal ultrasound bill” and “Co-Patroned the ‘Personhood’ bill that would outlaw all abortion and many common forms of birth control.” Most disturbingly, it’s quite possible that Obenshain will run again, in 2017, for Attorney General of Virginia. Shuddderrr.

As for the guy he endorsed, Sen. Steve Martin, he’s even worse than Obenshain if that’s possible. In addition to supporting the same far-right-wing stuff as Obenshain, Sen. Martin is also known for outlandish, extreme and even bigoted comments like:

*Virginia GOP Sen. Steve Martin Calls Women “the child’s host (some refer to them as mothers)”

*“Child’s Host” State Senator: Torture Justified “no matter what body parts are lost in the process”

So yeah, Martin is “out there” — far, far “out there.” And so is Obenshain, who just endorsed him for reelection (see below for “highlights”). Yet more evidence of why we all need to make sure if Obenshain runs again statewide in 2017, that he loses badly. You can also support April Moore, Obenshain’s Democratic opponent THIS year.

I write to you today to ask for your support of my good friend Steve Martin’s re-election campaign. Steve has stood with me and other conservatives in the Senate time and time again, fighting hard for our shared conservative values and principles. He has always been someone that conservatives can count on to get the job done and take the principled stance.

…Steve has championed the family values we hold dear and has played a key role in promoting commonsense, conservative solutions. He has been a leader on education reform and stood by my side last session in advancing my constitutional amendment, which has the opportunity to open up access to charter schools for thousands of Virginia’s students.

Steve is also someone we can trust to ensure fiscal responsibility is being exercised in Richmond. He has stood in staunch opposition to every tax increase proposal and has fought hard for tax relief for working Virginia families. Steve has also been a leader in the fight against Obamacare and Medicaid Expansion. He was the chief patron of Virginia’s Healthcare Freedom Act, which enabled Virginia to file suit against the federal government.